The free course will help over one million economically disadvantaged learners from various parts of the country to help them upskill. 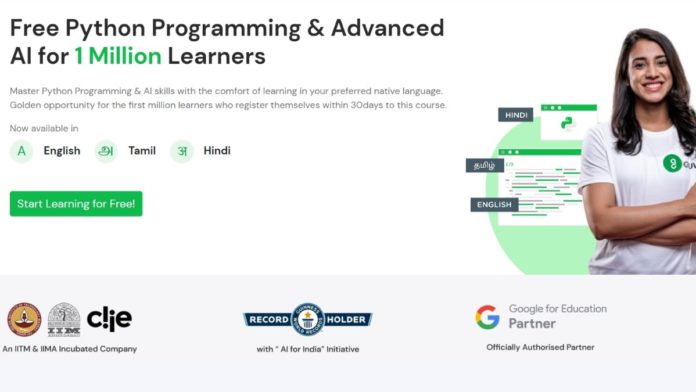 IIT Madras and IIM Ahmedabad incubated startup GUVI announces that it has partnered with the All India Council of Technical Education (AICTE) to offer free Python and artificial intelligence courses to students.

The new program will after more than one million learners from the disadvantaged sections of the Indian society and help them gain the required skills to kick start their careers in the technology industry.

The initiative named NEAT 3.0 was recently launched by the education minister of India, Dharmendra Pradhan. GUVI officials and the startup founders were also present at the launching ceremony of NEAT 3.0 held in New Delhi.

A significant highlight of the newly launched free course for Python and artificial intelligence is that it would offer high-end training to learners in multiple regional languages of the country, including Tamil, Hindi, Telugu, and many more.

“I appreciate GUVI for joining with AICTE to lead this initiative for empowering the socially and economically disadvantaged youth through its online and vernacular approach in tech-learning. India needs enormous employable youth propelled through such initiatives of AICTE,” said education minister Dharmendra Pradhan.

He also mentioned that he is incredibly proud to witness that Indian startups are becoming global leaders in the 21st century. According to the ground plan, AICTE will distribute free edTech coupons to learners having an annual family income of less than 8 lakh via the NEAT portal and GUVI’s official website.

Co-founder and CEO of GUVI, Arun Prakash, said, “Our aim to bestow the best employable skills on our nation’s youth coincides with the aims of NEAT. Python Programming and AI skills offered through this collaboration will be of strong support for the deserving students, helping them to grow in their career.”