This article will list the top robotics companies in 2022 across the globe. 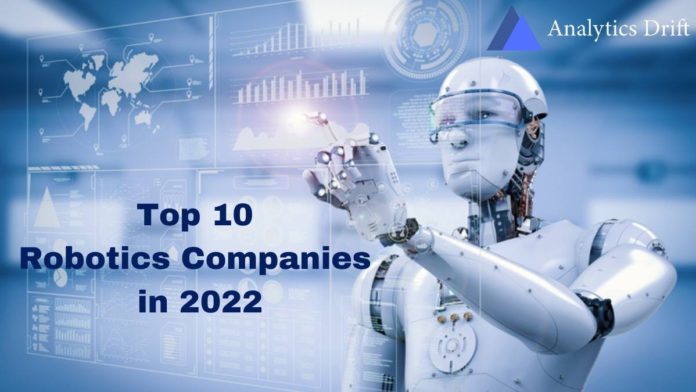 Robotics is among the world’s fastest-growing industries as technology advances over the years. Experts suggest that the robotics sector is expected to develop rapidly in 2022 as new tactics and technology improvements spark a surge in new activities. According to a recent report, the global robotics market is set to rise in value from $25 billion in 2021 to nearly $260 billion by 2030. Robotics is a crowded industry with over 500 companies producing products that fall into four categories: traditional industrial robots and cobots, stationary professional services, mobile professional services, and automated guided vehicles (AGVs) for transporting loads in logistics or assembly lines. Professional services robots, which are currently only a fragment of the market, might have sales that are more than twice those of conventional and logistics robots. This article will provide information regarding the top robotics companies in 2022 across the world. A point to be noted is that this article does not rank the companies according to the positions they are placed in.

Boston Dynamics is a United States-based robotics company founded in 1992 by Marc Raibert. The firm was founded as a spin-off from the Massachusetts Institute of Technology, where National Academy of Engineering member Marc Raibert and his colleagues pioneered the development of animal-like robots. Last year the company released the third version of the software for its dog-like robot named the Spot robot. The latest version focuses on allowing Spot to complete tasks without the need for human participation, pushing the limits of automation. Furthermore, Boston Dynamics is the home of DI-Guy, a real-time Human Simulation, and Artificial Intelligence program that is the industry leader in the VizSim market. These capabilities and offerings of Boston Dynamics will make it one of the best robotics companies in the world in 2022.

United States-based electric self-driving vehicles developing firm Nuro specializes in developing and operating a fleet of autonomous electric vehicles that can be used for delivering assorted local goods. Nuro’s R2 robot is the US Department of Transportation’s first entirely autonomous, zero-occupant on-road vehicle licensed for commercial delivery. The newly launched R2 autonomous delivery car comes with two times the cargo space compared to its older generation. Nuro has a unique feature in that it has front airbags, which serve to save the car from serious damage if it is hit accidentally while in transit and also reduce the risks of causing any damage to pedestrians. The company was founded by Dave Ferguson and Jiajun Zhu in 2016 and has received total funding of more than $2 billion over the past. The company’s highly competent and green autonomous vehicles will make it a notable robotics company in 2022.

Mobile Industrial Robots is a top Denmark-based robotics company that was founded by Niels Jul Jacobsen in 2013. According to the company, it is committed to developing user-friendly, versatile, and safe robots to assist businesses in increasing the efficiency of their operations. Internal transportation and material handling play a fundamental part in logistics success, and MIR offers multiple robots such as MIR 100, MIR 250, MIR EU Pallet Lift 1350, and several more that help companies in optimizing their internal transportation networks. The robotic company’s AMRs target a variety of workflows for small and mid-sized firms as well as a major production and distribution hubs. Its robots have been deployed in various parts of the world, including Finland, China, Slovakia, and the United Kingdom, where they have been serving their duties successfully.

One of the leading robotics companies working for the restaurant industry, Miso Robotics, was founded by Buck Jordan, David D. Zito, Robert Anderson, and Ryan Sinnet in 2016. The company develops and manufactures artificial intelligence-powered robots that help chefs across the world in the preparation of food in restaurants. Recently the company deployed its Flippy 2 frying robots at Wimpy in Dubai Mall in collaboration with Americana Restaurants. Miso Robotics claims that its Flippy 2 can accomplish the duty of a complete fry station on its own, streamlining operations in quick-service restaurants (QSRs). Its capabilities include grabbing burger patties, placing them on a heated grill, checking each burger’s cook time and temperature, and then sending notifications to chefs. Apart from the Flippy 2 robot, the company plans to station its arm-based robot named Chippy to make tortilla chips at fast-food chain Chipotle. These capable robots offered by Miso Robotics make it one of the best robotics companies in 2022 globally.

Seergrid is yet another top robotics company that develops and manufactures Autonomous Mobile Robots. United States-based Seergrid was founded by Hans Moravec and Scott Friedman in 2003. It combines AMRs, enterprise software, and best-in-class services, according to the firm, to provide a full, integrated material handling automation system. Some of its offerings include Palion AMR, Palion Lift, and Pallet Truck. Seegrid’s Fleet Central business software package delivers critical information regarding Palion AMR fleet’s state and performance, along with the flow of materials. Furthermore, Seergrid’s Fleet Geek platform gives real-time actionable analytics that supports facility decision-making. Palion AMRs have traveled over 5 million autonomous kilometers in client sites without a single incident involving employees, making it a highly reliable and secure robotics solution. Earlier this month, the company also had been identified as a Representative Vendor in Gartner “Market Guide for Intralogistics Smart Robotics.”

United States-based COCO, also known as Cyan Robotics, is a last-mile delivery service that deploys human-operated sidewalk robots to transport goods to end consumers. The company was founded recently in 2020 by Brad Squicciarini and Zach Rash. COCO currently employs 1,000 robots to make deliveries for more than 50 restaurant brands, ghost kitchens, convenience and liquor stores, supermarkets, and others. Coco travels to the restaurant to pick up the order, then merchant staff pack Coco as soon as the food is ready, and the robot eventually arrives at the customer in 15 minutes or less. Moreover, COCO claims that its solution can considerably increase the margins of merchants, making it a reliable and effective robot in 2022.

Australia-based robotics firm Advanced Navigation was founded by Chris Shaw and Xavier Orr in 2010. Advanced Navigation, being a top robotics company in 2022, has a strong team specializing in sensors, GNSS, inertial navigation, RF technologies, acoustics, robotics, AI, and algorithms. Recently, the company launched its new artificial intelligence (AI)-powered undersea autonomous drone called Hydrus. It has been developed primarily for applications that demand high-resolution pictures and video along with precise geo-referenced data. According to the company, its new underwater drone will drastically improve underwater research capabilities by simplifying the data collection process more than traditional methods. Hydrus can uncover the causes of some of the ocean’s most significant climate change phenomena, such as CO2 absorption, reef bleaching, new diseases, loss of marine life and biodiversity, coastal erosion, fishery decline, and others.

Stanford and Carnegie Mellon’s artificial intelligence research centers served as the foundation for Nimble. The company specializes in building AI-powered robots that pick and pack anything to provide the most efficient, cost-effective, and long-term on-demand order fulfillment. Its high-end technology makes it one of the top robotics companies in 2022. AutoStore, Opex, Bastian, Swisslog, TGW, and Kuecker Pulse Integration are among the main system integrators and providers using Nimble’s robots in their systems. The Nimble robots have picked over 15 million objects from 500,000 different goods, including eyeliners, belts, body wash, and loofahs, along with electronics like USB drives, keyboards, etc. Nimble had also secured $50 million in Series A funding in March 2021, headed by DNS Capital and GSR Ventures. Nimble has grown its workforce from 25 to 75 individuals since its Series A fundraising round and has rapidly expanded its customer base.

Bharati Robotics Systems is a homegrown robotics company that specializes in developing robotic solutions for the service, defense, industrial, agricultural, and other industries. According to the Indian robotics company, robots will not only boost efficiency across processes in companies but will also reshape markets and sectors. This would result in a more robust economy with more quality and well-paying employment. One of the most famous offerings of Bharati Robotics Systems is the August 1.0 robot. It is an Industrial floor cleaning robot that is utilized to keep floors clean while potentially saving money, labor, and time. August 1.0 is also equipped with an obstacle avoidance system with a safety bumper, and instant braking with an emergency switch is standard. The firm’s vision and its offerings make it one of the top robotics companies in India.

Last but not least, it is Elon Musk’s Tesla. Though their robot has not yet hit the market, the company has been developing a humanoid robot for years. According to recent reports, Tesla’s humanoid robot will be showcased during the company’s second Tesla AI day, which is scheduled to be held in the month of September this year. Tesla’s Optimus is a human-sized robot that can handle necessary daily duties such as cleaning, food shopping, and so on. Therefore, it can be expected that it would make the lives of people simpler when launched in the market. Optimus will be about 173 cm (5ft 8 inches) tall, weigh around 57 kgs, and be capable of carrying up to 20 kgs of weight. If the promises are kept, then Optimus will be the world’s one of the most high-tech robots to be ever created for commercial purposes.