According to the researchers, the new E-skin could aid in the development of a next-generation series of robots with human-like sensibility. 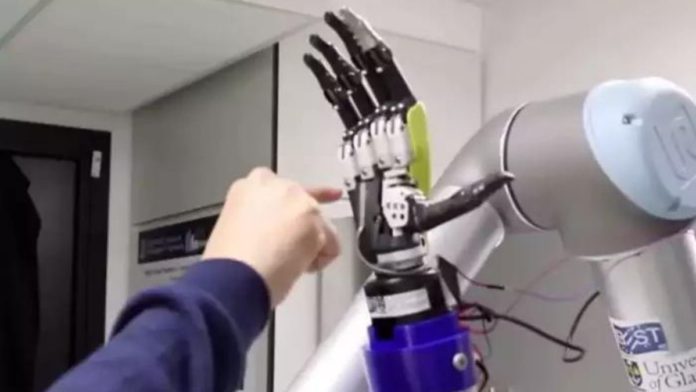 Researchers from the University of Glasgow have developed a new electronic skin that is touch-sensitive and can feel pain.

In order to learn, the newly designed artificial skin includes a new form of processing system based on ‘synaptic transistors,’ which replicate the brain’s neural networks.

According to the researchers, it could aid in developing a next-generation series of robots with human-like sensibility.

Researchers from the University of Glasgow also released a video on YouTube demonstrating a robot hand that employs smart skin and has a remarkable ability to learn and respond to external stimuli.

The newly developed e-skin is inspired by how the human peripheral nervous system processes impulses from the skin to decrease latency and battery waste.

The researchers printed a grid of 168 synaptic transistors manufactured from zinc-oxide nanowires directly onto the surface of a flexible plastic surface to create an electronic skin capable of a computationally efficient, synapse-like response. Later, the synaptic transistor was attached to a skin sensor located on the palm of a fully articulated, human-shaped robot hand.

“What we’ve been able to create through this process is an electronic skin capable of distributed learning at the hardware level, which doesn’t need to send messages back and forth to a central processor before taking action,” said lead researcher Ravinder Dahiya.

He further added that they feel this is a significant step forward in their efforts to develop large-scale neuromorphic printed, electronic skin that can respond to stimuli correctly.

Last year, Meta AI collaborated with researchers at Carnegie Mellon to develop a kind of synthetic skin named ReSkin that can be used in robotic hands. The one-of-a-kind robotic skin can help artificial intelligence-powered robots retrieve information such as item weight, texture, temperature, and state.