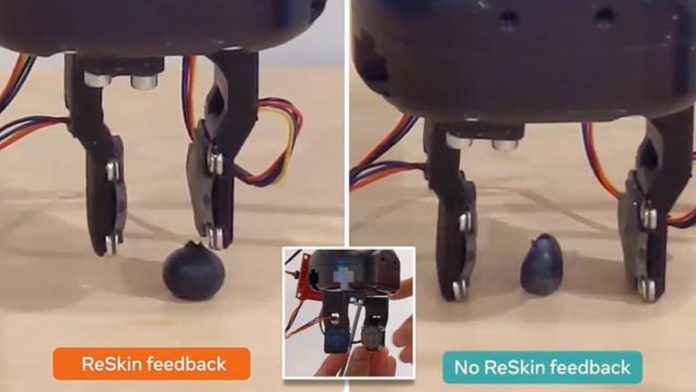 Meta AI formerly known as Facebook, collaborated with researchers at Carnegie Mellon to develop a kind of synthetic skin named ReSkin that can be used in robotic hands. Researchers mention that it is pretty challenging to develop touch-sensitive technologies for artificial intelligence and robotics.

Meta has created a unique robotic skin that has the capability of assisting artificial intelligence-powered robots in retrieving various information like object weight, texture, temperature, and state.

It is a cost-effective and replaceable technology that uses machine learning algorithms, soft robotics, and magnetic sensing technology to generate critical object information. According to Meta, the technology can be effortlessly integrated with existing artificial intelligence-powered robots.

Postdoctoral researcher at Meta, Tess Hellebrekers, said, “I want this sensing skin to be so robust and simple that anyone could set it up and start gathering touch data within a day.”

The newly developed artificial skin will play a vital role in advanced artificial intelligence-based robotics research and projects as it solves one of the most critical challenges of touch sensing and collecting rich contact data.

Meta mentioned in a blog that ReSkin could be used to perform various touch-based tasks, including object classification, proprioception, and robotic grasping. Mark Zuckerberg said, “We designed a high-res touch sensor and worked with Carnegie Mellon to create a thin robot skin. This brings us one step closer to realistic virtual objects and physical interactions in the metaverse.”

Meta and Carnegie Mellon researchers tested ReSkin on a robot to touch, lift, and grab soft fruits like grapes, strawberries, and blueberries. The test showed excellent results and displayed one-of-a-kind capabilities of the newly developed technology.