Researchers from China and Iran have developed an AI algorithm that makes soccer robots shoot goals with ease. 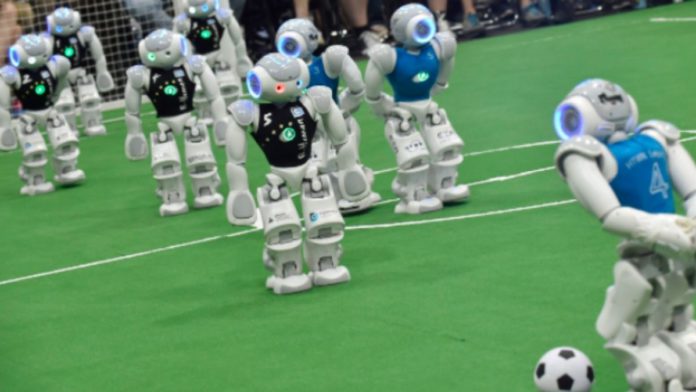 RoboCup is an annual international robotics competition where robots play soccer and compete with different robot teams worldwide. The idea behind the game is the research project, which uses footballing robots in a quest to develop machines that could one day assist humans. The ultimate goal of the robotics tournament is to create a team of robots capable of competing and winning a soccer match against human soccer players by 2050.

The humanoid robots play soccer based on the vision that helps make decisions depending on the robot’s position. It auto-analyses the field using the information that has already been programmed into it. The robots are made of stern stuff consisting of hardware for the brain, webcams for vision, and a body full of motorized parts, that allows them to pursue the ball around the pitch and shoot for goal. Using the camera, the robot determines the field setting around them and then transmits Wi-Fi to other robots in the team to make a move.

The critical factor of robotic soccer games is that the robots in a team can simultaneously make decisions for shooting the goal.

The scientists and the AI researchers who have designed those soccer robots can test their computational tools by employing the RoboCup 3D soccer simulation league. This tool accurately replicates the real RoboCup environment in simulation, allowing AI scientists to design and implement AI strategies and methods for robots to shoot more goals.

The ultimate goal of the teams participating in the league is to increase the number of shots/goals compared to the other team. To achieve this, researchers from China and Iran have recently created a new simulation technique that enhances the ability of robots to efficiently shoot the ball while walking. Researchers have developed a computational approach called Q-learning algorithm to achieve this process, which allows the robots to shoot goals even when walking.

Mainly to generate shots on simulation, the inverse kinematics and point analysis approaches are followed. If these mathematical methods are succeeded in simulations, they can be used in real-world soccer robots as well. This paper is published in SpringerLink, where the researchers clearly explained the approach of the Q-learning algorithm used in soccer simulations 3D league.