While only being introduced into Broadcast this week, the technology has been under development at NVIDIA for the last year under the name Maxine. 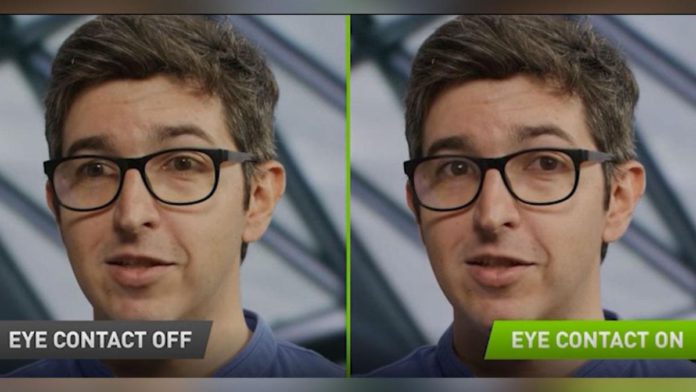 NVIDIA’s tool for live streaming and video conferencing, NVIDIA Broadcast, can now digitally alter a subject’s eyes in real-time to make it appear as though they are looking directly at the camera.

One issue while shooting live-streamed video at home for professional use or on video calls is that some people are uncomfortable staring directly into the camera and instead look either at a script or other people on screen.

To solve this issue, NVIDIA has been working on a type of “deepfake” technology that can artificially adjust the eyes of the subject to make them appear as though they are making eye contact directly with the camera.

The feature is called Eye Contact. NVIDIA explained that the new Eye Contact effect moves the eyes of the user to simulate eye contact with the camera by estimating and aligning gaze.

The eyes retain their natural blinks and color, and there is also a disconnect feature to transition smoothly between simulated and real eyes in case one looks too far away.

While only being introduced into Broadcast recently, the technology has been under development at NVIDIA since last year under the name Maxine. Maxine is a set of GPU-accelerated AI SDKs and cloud-native microservices that are developed to enhance video, audio, and augmented reality effects in real time.