CyberDog is powered by NVIDIA’s Jetson Xavier artificial intelligence platform and many other high-end sensors that allows it to perform various complex movements autonomously. 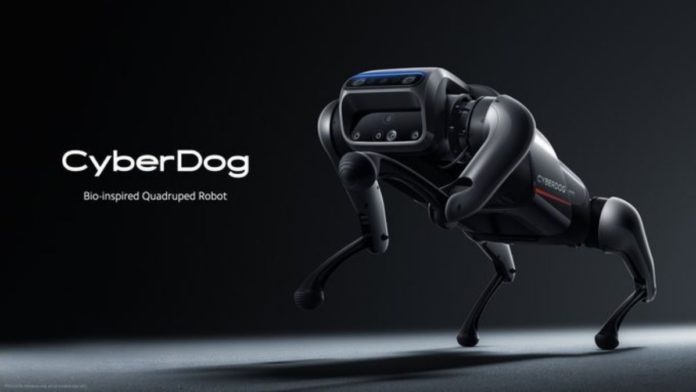 This new launch marks the beginning of Xiaomi entering into a completely different domain of robotics. Robotics enthusiasts in the worldwide open-source community can now collaborate and compete with Xiaomi engineers for the development of quadruped robots.

During the launch event, Xiaomi said, “CyberDog can analyze its surroundings in real-time, create navigational maps, plot its destination, and avoid obstacles. Coupled with human posture and face recognition tracking, CyberDog is capable of following its owner and darting around obstructions.”

CyberDog weighs nearly 3 kilograms and is powered by the Jetson Xavier AI platform developed by NVIDIA that has 48 Tensor and 384 CUDA cores. The robot comes with an array of different sensors and is equipped with multiple cameras, including Intel’s RealSense D450 that enables it to move autonomously.

It also has a GPS unit installed to aid its movements. Its motors can generate a peak torque of 32Nm that allows it to move at a maximum speed of 11kmph. With these technologies, CyberDog can analyze its surroundings in real-time and generate a navigational map to avoid obstacles during its movements.

According to Xiaomi, the robot dog can perform many complex movements like backflips. CyberDog comes with one HDMI and three USB-C ports that allow it to connect with various tools like LiDAR sensors, panoramic cameras, and lots more.

Xiaomi plans to launch 1000 units of CyberDog in the initial stage and will offer it at a price of $1544. The company will build a ‘Xiaomi Open Source Community that would enable developers to share their progress with a worldwide audience.