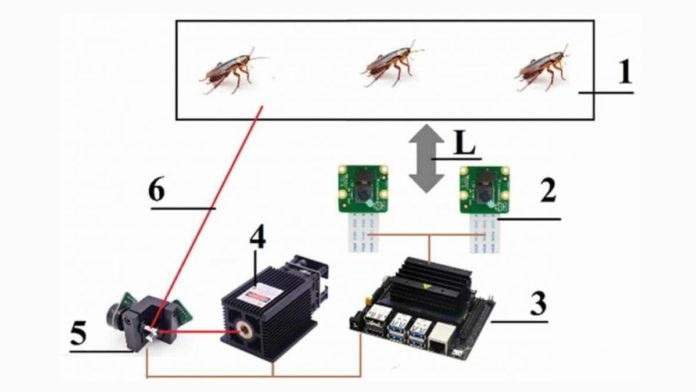 Researchers from Heriot-Watt University, University of Sussex, and University Paul Sabatier have developed a technology using AI to target, shoot, & kill cockroaches. IIdar Rakhmatulin, Mathieu Lihoreau, and Jose Pueyo have described the tool in Oriental Insects, a journal based on insects.

With varying degrees of success, numerous attempts have been made to develop products intended to kill roaches. Insecticides can be dangerous for people, pets, and the environment, which is a significant disadvantage to most such products. The researchers’ brand-new solution to the issue in this new endeavor is to kill people with a laser beam.

The device is a straightforward machine learning-driven device. It was based on Jetson Nano, a compact device with machine learning software, to which the researchers added a galvanometer, a programmable laser, and two cameras. The galvanometer was used to receive data from the AI unit and then utilize that data to adjust the laser’s direction.

They discovered that the equipment could precisely detect and kill cockroaches on testing the prototype. They also discovered that, like the “Star Trek” phaser, they could fine-tune the laser to allow different impacts.

If they wanted, the researchers could stun the cockroach, which usually causes the cockroach to change its direction. They could also set the laser to kill, in which case it would execute its intended target.

The photos used for training have been uploaded on GitHub, and the tracking dataset has been posted on Kaggle. The researchers maintain that they have no intent to market the device. Anyone can use the method described in their study to create a device of their own.