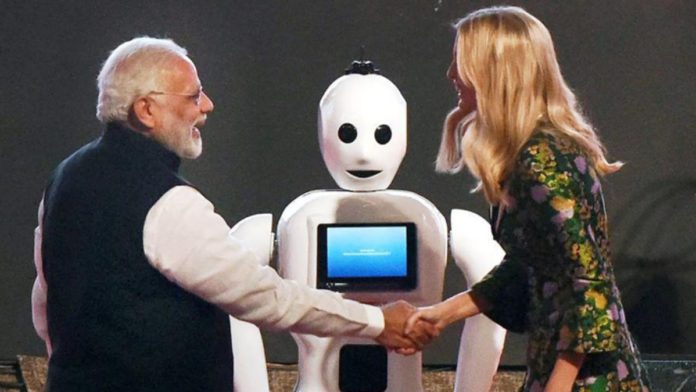 A humanoid robot is a unique robot that has a body shape built to mimic the human figure. The technology can be used for the research of different kinds, including bipedal locomotion or to automate several tasks performed by humans across various sectors. Government and private enterprises are increasingly turning to advanced robots to save time, human resources, and cost. More than 3,412 new industrial robots were installed in India in the year 2017, which is an increase of 30% over the 2,626 units that were installed in 2016, said the International Federation of Robotics (IFR) in a report published in January 2019. While the automotive industry has seen the highest adoption, the demand for robots is growing in several other sectors as well. Satyanarayana P, director of LFP, visual products and robots, Epson India, mentioned that there is still a long way to go. On the other hand, the awareness is increasing, and the humanoid robot market is gradually opening up in the country. Here we present to you our list of the top 10 latest humanoid robots in India.

Ajit 1.0 has been developed in KLE Technological Institute by final year students of the automation and robotics department. The robot is capable of performing basic gestures such as ‘namaste’ and handshake as a response to related voice inputs. Ajit also has autonomous navigation along with obstacle avoidance technology and text-to-speech interaction abilities. The next generation of the robot, Ajit 2.0 was unveiled by KLE Technological Institute in 2019, which also has humanoid legs for locomotion along with enhanced performance and artificial intelligence. Developers claim that this next-generation robot is capable of helping humans in day-to-day tasks.

Sandy is a famous humanoid robot developed by i-Brain Robotics in India. It is the world’s first artificial intelligence-enabled human-sized humanoid robot. With a five feet stature and a cosmic network of sensory circuits, the creation of Sandy is made to precisely mimic human reactions. It comes with a ‘true emotion’ sensory unit and possesses self-learning capability because of the neural learning process. The advanced robot can communicate in diverse dialects using an artificial intelligence system. These high-end abilities make Sandy one of the best and most intellectual companions that one would want. Sandy is the first humanoid robot powered by Android, which can cope up with social interactions and can seamlessly recognize faces because of its unique neural networks. The robot can also greet people in the day and can go for interactions with names and features. The robot has been developed to aid operations for many industries, including healthcare, hospitality, and banking.

Manav is the first 3D printed humanoid robot in India, designed by A-SET Training & Research Institutes New Delhi. The robot was unveiled at the IIT Mumbai Tech fest by the programmer of the robot, Diwakar Vaish. The entire structure of Manav is made with 3D-printed plastic. The robot is two feet tall and weighs around two kgs. It comes with two cameras and two headphones installed in its eyes and ears, respectively. Manav has the capability to perform various motion intensive tasks like push-ups and handstands. The humanoid robot is considerably more affordable compared to other commercially available options as it is priced in between ₹1.5 to ₹2.5 lakhs.

Artificial intelligence and machine learning start-up H-Bots Robotics, based in Hyderabad, developed a new police robot to support the implementation of law, order, and traffic. It is made with components developed solely in India. Recently, the Chief Minister of Kerala, Pinarayi Vijayan, inducted RoboCop at the state’s police headquarters. The robot was given the rank of Sub-inspector and will perform tasks at the police headquarters’ front office. The human-sized robot has cameras and an array of sensors, such as proximity, ultrasonic, and temperature sensors. RoboCop is designed to protect and secure malls, offices, airports, signal stations, and other public areas, which can be used autonomously to ensure safety. Additionally, the advanced robot also has the ability to diffuse bombs.

Kempa is a new artificial intelligence-powered humanoid robot developed by a Bengaluru-based enterprise, Sirena Technologies. The robot will be deployed at Bengaluru’s Kempegowda International airport, where it will greet and guide travelers in English and Kannada regarding tourist places in the city. Prior to its official launch, the humanoid robot Kempa is being programmed to assist the passengers by providing all the essential information about their journey in a scrupulous manner. Priyank Kharge, Innovation and Technology Minister of Karnataka, unveiled this robot through a video shared on Twitter. The video featured Kempa introducing itself as “KEMPA, is an advanced humanoid completely designed and manufactured in Bengaluru. I am designed for deployment at the Kempegowda International Airport, where I can assist you with flight-related queries, suggest places to visit in Karnataka, or even entertain you in a conversation with artificial intelligence over a cup of coffee.”

INDRO is an autonomous robot that was built in a house with widely available and low-cost materials like plastic, aluminum, wood, and cardboard. The robot is developed to carry out certain everyday tasks such as education, entertainment, and a few household work. The robot has the ability to carry around 150 kilograms of payload on its platform under the knee in case it is required for an event. An artificial intelligence-powered application is being developed for mobile and computers that can be used to control INDRO remotely. The robot is capable of performing every action like a human above knee level using its 31 motors and 29 axes. INDRO was built using minimalistic equipment like a hammer, screwdriver, hand cutting saw, and drill machine.

Intelligent Robotic Assistant (IRA) is an interactive humanoid robot that can answer 4,000 questions through its artificial intelligence-powered voice-based navigation. The advanced robot was developed by HDFC bank and is currently deployed in many branches of the bank in multiple cities including, Mumbai, Bengaluru, and Kochi. HDFC bank collaborated with robotics companies like Senseforth Technologies and Inverto Makerspaces to develop this high-end iterative machine. Along with IRA, the bank had launched its virtual assistance ‘EVA‘ that has solved more than 65 lakhs queries of customers till date, according to HDFC officials. The robot has a 7.9-inch touch display for visual interaction and has an inbuilt indoor GPS-based navigation system with ultrasonic sensors to help it move inside the building.

Mitra and Candi are humanoid robots developed by a Bengaluru-based company, Inverto Robotics. Candi is a smaller version of Mitra that is capable of interacting with customers using artificial intelligence. Mitra is currently deployed in Canara Bank’s head office in Bengaluru, and Candi is operating at the MG road branch of the bank. Mitra is a 4.5 feet tall robot that mainly greets the customers in Kannada and helps them navigate inside the building, whereas Candi can answer more than 250 pre-loaded questions in English. According to bank officials, Mitra costs nearly three lakhs, and Candi is priced at ten lakhs. Mitra was seen greeting Ivanka Trump, senior adviser of the U.S. president and our Prime Minister, in an event held in 2017. The latest version of the robot, Mitra 3, comes with an enhanced camera, display, and conversational skills to make it blend with humans seamlessly.

RADA is an artificial intelligence-powered humanoid robot developed by Vistara Airlines in India. The main purpose of this development is to assist ground staff in delivering a better customer experience. RADA was developed with the help of the TATA innovation lab under Vistara’s innovation initiative. The robot can scan the boarding passes of the travelers and provide information regarding their travel. The famous robot comes with three cameras and a rotatable body developed with components manufactured in India. RADA is now deployed in Vistara Airlines’ lounge at Terminal 3 of Indira Gandhi International Airport, Delhi. The company assured that the artificial intelligence-powered robot will be improved over time as they gather more data to fine-tune and increase RADA’s capabilities.

Daksh is a famous remotely operated vehicle (ROV) robot developed by the Defence Research and Development Organisation (DRDO) for the Indian Armed Force. This highly advanced robot comes with a built-in shotgun and has the capability to identify Improvised Explosive Devices (IEDs) and diffuse them using its radio frequency shield. The aim behind the development of this robot is to reduce human casualties during war or anti-terrorist operations. DAKSH has been jointly developed by TATA motors, Bharat Electronics, and engineers of DRDO. The robot can be controlled by wireless technology as well as with a fiber optic communication system. DAKSH is capable of working for three consecutive days in one single charge. Its wheels have been specially engineered to climb stairs and run on diversified terrains.