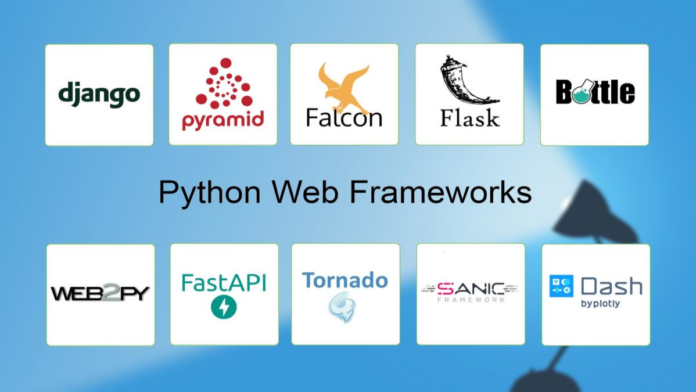 Python is one of the most used programming languages today. It contains a wide range of libraries and frameworks for every technical domain. Python frameworks are generally collections of modules or packages that assist developers with the prebuilt implementation of redundant tasks. This process helps developers spend less development time and focus more on application logic. Every framework has advantages and disadvantages depending on application requirements and developers’ preferences. This article overviews such widely used Python frameworks for web development.

Ruby on rails is the serverside web application framework written in Ruby programming language. Developed by David Heinemeier Hansson, Ruby in Rails is licensed under MIT. As per StackOverflow’s record, 55.34 % of people have chosen Ruby on Rails as the most liked web development framework.

Ruby on Rails supports model-view-controller architecture to provide a default structure for databases, web pages, and web services. It uses HTML, CSS, and JavaScript languages for the user interface and data formats like JSON and XML to transfer data.

Link to the framework: Ruby on Rails

Developed by FriendFeed, Tornado is a Python framework and asynchronous network library. Tornado uses a non-blocking network I/O to handle thousands of active server connections. It can be used in applications that require long polling, WebSockets, and long-time connection with users. Unlike the other Python web development frameworks, Tornado is not based on Web Server Graphical Interface (WSGI). However, it supports some features of the WSGI.

Link to the framework: Tornado

Aiohttp is an asynchronous Python web development framework that depends on Python 3.5 features like async and awaits. It uses Python’s asyncio library and serves as a client and server web framework. Aiohttp uses request objects and routers for the redirection of queries.

Link to the framework: Aiohttp

Growler is an asynchronous Python web development framework built on the Python asyncio library. It is based on Node.js’s express framework and is used for implementing complex applications. Growler handles requests by passing them through middleware technology. With Growler, businesses can use the asyncio library at its lowest levels.

Link to the framework: Growler

TurboGears is a web application framework written in Python programming language. In 2005, Kevin Dangoor developed TurboGears. However, the latest version of Turbogears is managed by a group of developers led by Florent Aide and Mark Ramm.

Like many of the modern Python frameworks, TurboGears also follows the Model-View-Controller (MVC) paradigm to develop web applications. It is made of three sections:

TurboGears is designed for solving complex industrial-strength problems and supports MongoDB as one of its primary storage backends. It consists of a transaction manager to help with multi-database deployments and supports many template engines.

Link to the framework: TurboGears

Flask is the most used Python web application framework for developing complex web applications. It was developed by Armin Ronacher, who led a team of international Python enthusiasts ‘Pocoo.’ Flask depends on the Werkzeg WSGI toolkit and the Jinja2 template.

The WSGI (Web Server Gateway Interface) is used as a standard for Python web application development. It specifies a common interface between web servers and web applications. On the other hand, Werkzeg is a WSGI toolkit to implement requests, response objects, and utility functions. The Flask framework uses Werkzeg as one of its bases.

Flask is mainly referred to as a micro-framework designed to keep the application scalable and simple. Since Flask is a microframework, it is used to implement tech projects like web apps.

Flask also supports modular programming, which is where Flask’s functionality can be split into many interchangeable modules. Each module in Flask acts as an independent building block that can execute one part of the functionality.

Link to the framework: Flask

Web2Py is an open-sourced web framework for agile development that consists of database-driven web applications. It is written in Python programming language. Web2Py is a full-stack framework containing all the components a developer requires to build a fully functional web application.

The Web2Py framework follows the Model-View-Controller pattern of running applications. It has an in-built feature to manage cookies and sessions. After committing a transaction in SQL, the session is also stored simultaneously. Web2Py can run tasks in scheduled intervals after the completion of specific actions.

It has the potential to address various issues that can lead to security vulnerabilities by following well-established practices. The Web2Py framework consists of Database Abstraction Layer (DAL) that can write SQL dynamically.

Link to the framework: Web2Py

CherryPy is mostly used object-oriented web frameworks in Python. It enables developers to build a web application effortlessly, which means developing less code in a short time. Remi Delon developed the first version of CherryPy in June 2002. Now, CherryPy is more than 10 years old, and it has proven its reliability.

Since CherryPy is designed on the multithreading concept, it can handle multiple tasks simultaneously. CherryPy follows the Model-View-Controller approach to developing web services. Therefore, CherryPy is a fast and developer-friendly Python framework.

CherryPy framework has the potential to build web services such as RESTful Web Service (RWS), SOAP, WSDL, and more. You can use it to build e-commerce websites or authentication services by integrating various other Python modules.

CherryPy can be easily deployed cost-effectively, as it has its HTTP server to host applications on multiple gateways.

Link to the framework: CherryPy

Django was first introduced by teams between the year of 2003 and 2005 who were responsible for creating and maintaining newspaper websites. After creating many sites, this team began to figure out and reuse many common codes and design patterns. These common codes evolved into a generic Python web development framework known as Django in July 2005.

Django encourages rapid development and clean design in web applications. It is an open-source and active community with excellent documentation and many free and paid support options. Django is used to build almost any type of website, from content management systems and wikis to news sites and social networks. Django can work with any client-side framework and deliver content in almost any format, such as HTML, JSON, XML, and more.

Django enables developers to avoid many common security mistakes by providing a framework engineered to “do the right things” to protect your website automatically. For example, Django offers a secure way to manage user accounts and passwords, avoiding using session information in cookies or storing passwords rather than password hash directly.

Link to the framework: Django

The Pyramid framework is based on core concepts like Zope, Pylons, and Django. It is based on Zope regarding extensibility, traversal, and declarative security. Zope is a family of open-source web application servers in Python. It is a robust framework that allows many people to collaborate while developing websites.

The Pyramid framework uses the (WSGI) Web Server Gateway Interface standard for promoting usability and separating functionality into distinct modules. Lastly, Pyramid is based on the Django web application framework that allows the rapid development of secure and maintainable websites.

Pyramid is the fastest Python web framework supporting small and large projects. It also supports events that are similar to Zope and Pylon frameworks. You can also generate URLs for routes, resources, and static assets in the Pyramid framework. It becomes easy for users to work with APIs that generate URLs. By generating various APIs of the Pyramid framework, you can alter the configuration arbitrarily without worrying about breaking links with any web pages.

Link to the framework: Pyramid

Link to the framework: Quixote

Bottle is a fast, lightweight, and simple WSGI (Web Server Gateway Interface) microweb framework in Python. It is distributed as a single file module with no dependencies except Python standard libraries. Bottle framework is the best choice for small applications and is mainly used to build APIs.

It is a great Python framework if you want to prototype an idea quickly. Since Bottle is simple to use, new developers can use it. Bottle framework has only one drawback: it has less documentation and support than other frameworks like Flask and Django.

The Model-View-Controller approach of the Django frameworks makes the maintenance of the applications more accessible. But, it becomes difficult on small applications where you play with random ideas. Therefore, the Bottle framework is a good option if you are not worried about your application’s long time structure.

Link to the framework: Bottle

Dash is an open-sourced microframework used to develop analytical web applications. It is the most popular framework among data scientists who are not familiar with web development. Dash uses React.js for front-end rendering.

Dash applications can also run web servers like Flask and communicate with JSON packets through HTTP requests. Dash applications are called cross-platform and mobile-ready applications, as they can be rendered in the browser and deployed on the server.

One of the essential features of the dash framework is that it does not require much coding to develop applications and offers a high level of customization. With dash, you also get plugin support and effective error handling.

Link to the framework: Dash

CubicWeb is a well-defined semantic web application framework in Python that focuses on applications’ reusability, quality, and efficiency. The CubicWeb framework is different from the other framework as it is semantic and allows developers to build applications by following object-oriented principles and reusing components called cubes.

Cube is the primary and essential unit in the CubicWeb framework. It is a minimal web application that consists of a data model (schema), logic (entities), and user interface (view). You can build a web application from a single cube, but two or more cubes are mainly required to provide broader functionality.

Link to the framework: CubicWeb