Till now, Omniverse and the various Nvidia tools that support it were in Beta. 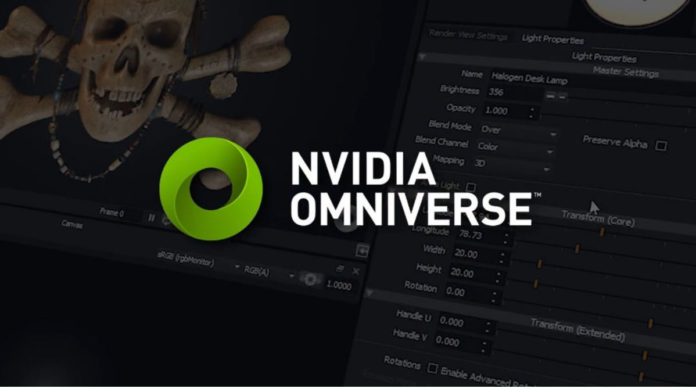 NVIDIA’s real-time 3D design collaboration and virtual world simulation platform, NVIDIA Omniverse, is now accessible in a free version for millions of individual NVIDIA Studio developers employing GeForce RTX and NVIDIA RTX GPUs. In other words, Omniverse is shifting from beta to 1.0 for creators and artists. The announcement was made at the CES 2022 tech trade event in Las Vegas by Richard Kerris, Vice President of the Omniverse development platform.

The company also revealed new platform improvements for Omniverse Machinima and Omniverse Audio2Face, as well as ecosystem upgrades and new platform capabilities, including Nucleus Cloud and more. Omniverse Nucleus Cloud is a ‘one-click-to-collaborate’ function that allows individual creators in different regions to share and collaborate on developing, altering, and updating big Omniverse 3D scenes without requiring significant data transfers. Meanwhile, Omniverse Audio2Face is an AI-powered tool from NVIDIA Jarvis that analyzes audio samples and applies a “blendshape” capability to match face motion to audio expressions. This, according to Rochard, will be crucial in the construction of meta-humans for metaverse applications.

New support for the Omniverse ecosystem has also been added from 3D markets and digital asset libraries such as TurboSquid by Shutterstock, CGTrader, Sketchfab by Epic, and Twinbru. Omniverse is adding new characters and items from games like Shadow Warrior 3 and Mount & Blade II: Bannerlord to its Omniverse Machinima assets for free. Users and producers may remix the game material to create their 3D movies by dragging and dropping assets into their scenes.

Omniverse can be considered NVIDIA’s collaborative solution for creating digital twins of real-world things and is sometimes referred to as a “metaverse for engineers.” It combines several of NVIDIA’s fundamental technologies, including GPU-accelerated rendering, AI modeling and simulation, 3D scene building, and augmented reality visualization. The universal scene description (USD) exchange framework established by Pixar in 2012 has been combined by NVIDIA Omniverse with these technologies for modeling physics, materials, and real-time path tracking.

Like HTML provided the common “connective tissue” for content development years ago, Richard defined the platform as offering the common “connective tissue” for developing and administering virtual worlds. Although, as Richard pointed out, the platform has already been downloaded by about 100,000 people since the testing program began approximately a year ago, the switch from beta to public access this week will put that idea to the test.

Richard also stated that Omniverse currently has “connectors” to 14 external apps such as Autodesk 3ds Max, Autodesk Maya, and Epic Games’ Unreal Engine and that the platform would soon have a connector to Adobe Substance 3D Material Extension. Nvidia Omniverse now interfaces to e-on software’s VUE, PlatFactory, and PlantCatalog, among other new connectors and asset libraries. VUE is an all-in-one application that lets users create digital 3D nature based on nature’s rules, from skies and volumetric clouds to terrains, large-scale ecosystems, wind-swept vegetation populations, open water bodies, roads, and rocks. It also includes a native Omniverse live link connector that syncs all scene modifications directly to Omniverse stages. PlantFactory allows you to make twigs as little as twigs or redwood trees as vast as redwood trees, as well as wind animation effects. PlantCatalog includes around 120 ready-to-use plant items in its database.

The announcement at CES 2022 comes less than two months after Omniverse Enterprise was released for enterprise creation of digital twins and other metaverse applications for industrial use cases. In November at the NVIDIA GTC Fall 2021 conference, Omniverse Enterprise, a premium subscription platform for professional teams, was launched and is marketed through NVIDIA’s global partner network. Omniverse Enterprise is a multi-element system that serves end-users while also supporting back-end infrastructure. The Omniverse Nucleus server software, which costs $1,000 per named user per year, is included in this package. Omniverse Nucleus is a database engine that links people and allows 3D assets and scene descriptions to be shared. Designers working on shading, animation, lighting, modeling, layout, and special effects may collaborate to build a scene once they’re connected. Nucleus can be accessed by several people.

NVIDIA Omniverse Enterprise enables 3D production teams to collaborate smoothly on large-scale projects. BMW, for example, is employing Omniverse to create a virtual factory that incorporates a variety of planning data and apps and allows real-time cooperation with no restrictions. Members of BMW’s Digital Solutions for Production Planning and Data Management for Virtual Factories gave a detailed tour of the Regensburg factory’s fully functional, real-time digital twin capable of simulating at scale production and finite scheduling based on constraints down to work order instructions and robotics programming on the shop floor at GTC November 2021 Conference.

Gait Recognition: A step up from current Biometric Technologies?