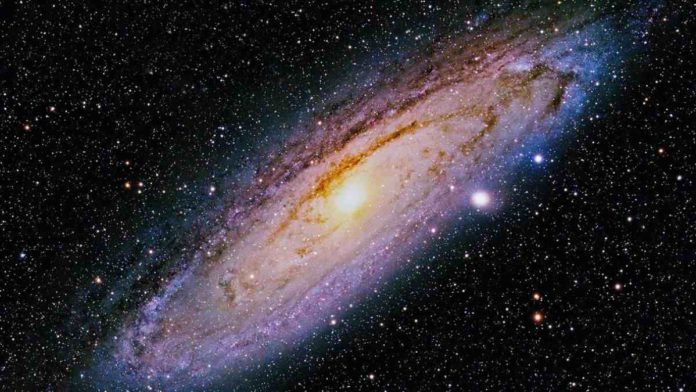 A new cosmic map created by artificial intelligence shows hidden constructions connecting galaxies, which would help scientists predict a future collision between the Milkyway and Andromeda galaxies, which is our nearest neighbor.

An announcement from Pennsylvania Negate University mentioned that the map generated using machine learning would also help scientists to discover more about dark matter and its involvement in the creation of the universe.

Researchers said that the map charted the expected collision of the two galaxies in 4.5 billion years, including dark matter filaments that bridge the two galaxies that can affect the merger. Dark matter and dark energy account for roughly 80% of the matter in the universe, but the scientists poorly understand it.

Dark matter is invisible in wavelengths of light. Hence it can’t be seen with telescopes. But, scientists can trace the influence of dark matter’s gravity on large cosmic structures, such as galaxies.

An associate professor of astronomy and astrophysics, Donghui Jeong, said, “Because dark matter dominates the dynamics of the universe, it basically determines our fate.” He further added that it is possible to generate a map for billions of years to predict what will happen in the local universe using artificial intelligence and machine learning.

It can also help to evolve a model back in time to understand the history of our cosmic neighborhood. The map also portrayed many new filaments that the researchers plan to study further, including those that connect the Milky Way to Andromeda.

The accuracy of the map is expected to increase after the launch of NASA’s $9.8 billion James Webb Space Telescope, which will gather data to help scientists see fainter and distant galaxies.

“Having a map of the cosmic web opens up a new chapter of cosmological study,” said Jeong. The map has enabled scientists to study the nature and distribution of dark matter across the universe better.