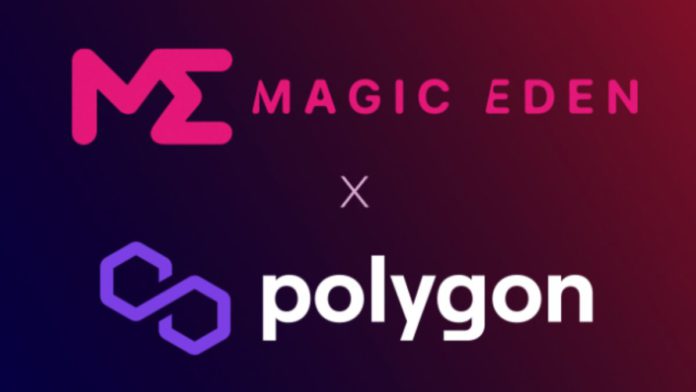 The NFT marketplace Magic Eden announces a collaboration with the Ethereum scaling layer-2 blockchain Polygon in order to expand into the blockchain gaming and NFT ecosystems.

In addition to hosting some of the biggest Web3 game projects and publishers, including well-known brands like Ubisoft, Atari, Animoca, and Decentraland, Polygon also serves as a scaling solution for the Ethereum blockchain. It is the perfect choice for projects that need a lot of digital assets since it enables transactions that are considerably faster and cheaper than those possible on Ethereum’s own mainnet.

Since adding the Ethereum blockchain in August, Magic Eden, which was previously only recognized as the leading marketplace for Solana NFTs, has grown into a multi-chain platform. Magic Eden claims that it chose Polygon as the next addition for two main reasons: the platform’s potential for hosting massive Web3 gaming events and the rising acceptance among leading Web2 companies. Meanwhile, the Solana blockchain is facing an uncertain future since the value of its native token, SOL, has dropped by more than 50% following the collapse of one of the blockchain’s largest investors, FTX, in recent weeks.

After expanding to Polygon, Magic Eden will be able to collaborate with strategic intellectual property owners, world-class game developers, and emerging creators – who will be eager to avail Magic Eden’s cross-chain audience.

With major game development companies BORA by Kakao Games, IntellaX, no, Boomland, Block Games, Planet Mojo, and Taunt Battleworld poised to launch on its Polygon Launchpad coming out in December, the collaboration has already brought significant partnerships to Magic Eden. The distribution and go-to-market competence of Magic Eden, which includes project/concept positioning, pre-launch timetable planning, and links to Web3 groups, will be advantageous for these games.

Following the launch of Magic Eden’s Polygon Launchpad, a MATIC-compatible NFT market will be introduced. This marketplace will respect royalties while looking at additional cutting-edge strategies to encourage other sources of creator monetization.

After that, Magic Eden plans to roll out additional Polygon support for NFTs, including Magic Eden List (an audience targeting and allowlist tool), Drop Calendar, and analytics which will boost NFT discovery and trading.

There was a brief decline in trade volumes last month as a result of the Magic Eden switching to an optional royalty model. Despite conflicting opinions over the discontinuation of royalty payments, the integration of Polygon NFTs may aid in restoring greater trading activity to the platform.

In July, Magic Eden announced the launch of Magic Ventures, a new fund dedicated to investing in innovative blockchain games and gaming infrastructure. In the same month, it also started Eden Games, its own gaming subsidiary, as the platform advances into blockchain gaming.