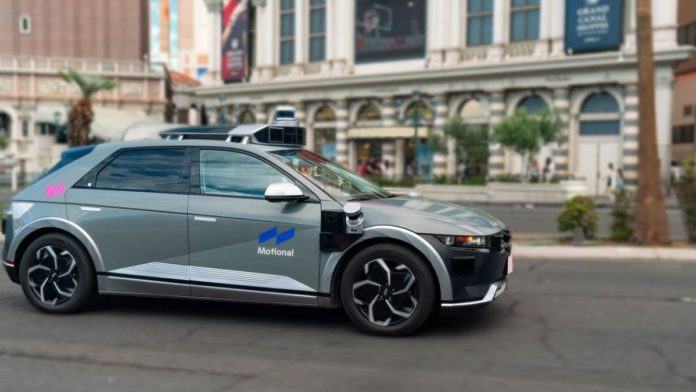 Motional, a Hyundai and Aptiv joint venture, and Lyft recently started an all-electric robotaxi service now active in Las Vegas. The robotaxi service will be a prelude for a fully driverless service to be launched in 2023.

Motional is an autonomous vehicle company working autonomously driven vehicles in Las Vegas via a partnership with Lyft. During the annual Consumer Electronics Show, the joint venture began as a weeklong pilot between Aptiv and Lyft in 2018. As of now, they have completed over 1,00,000 passenger trips.

Lyft and Motional are now proceeding with the public launch of their service, making it the first time that customers can hail autonomous rides in Hyundai Ioniq 5s. However, the rides would accompany a safety driver behind the wheel for emergencies.

These robotaxis do not require potential riders to sign up for a waiting list or any non-disclosure agreement for beta-testing. The rides will be free now while the companies plan to charge it from the next operational years.

Akshay Jaising, VP of Commercialization at Motional, said, “Any Lyft rider in Las Vegas can request a Motional AV. No NDAs. No sign-ups. That’s how Motional and Lyft have operated for the past four years. We believe the best feedback is from real riders, not employees or limited participants.”

Motional also claims to have a permit to test its fully driverless vehicles, set to launch in 2023 in Nevada. The companies anticipate that they will secure appropriate licenses and permits to begin conducting commercial rides by 2023.