HomeNewsHow will the US CHIPS bill affect the global chip industry?
News

According to the bill, $52.7 billion will be set aside for the research, development, and domestic manufacturing of semiconductors. 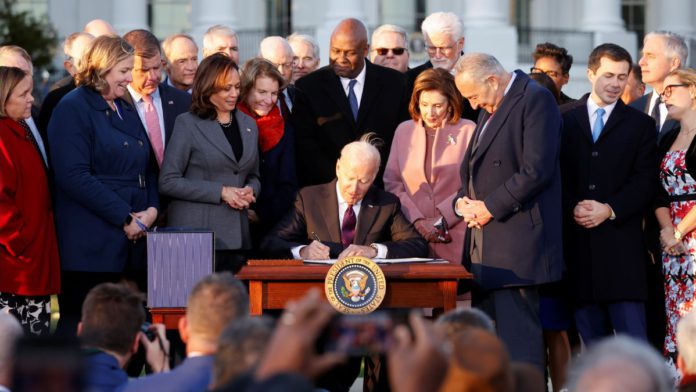 Although meant to boost semiconductor production in the US, what does this bill mean for the global chip industry? And how are the international competitors responding to it? Let’s discuss.

Reason for the Bill

There are several reasons we can consider as to why this bill has been passed. A global shortage of semiconductors or chips last year led to the realization that the United States needed its own substantial manufacturing of semiconductors. A shortage of the former has left carmakers with unfinished vehicles. Since then, chip manufacturers have been lobbying for such a bill to pass.

The growing use of electronic devices like laptops and smartphones in homes has further increased the demand for chips. According to Forbes, about 75% of the world’s semiconductor demand is met by East Asian manufacturers. In particular, Taiwan and South Korea’s Samsung have been critical proponents of manufacturing chips. However, China has been notably upping the production of semiconductors on a large scale.

Now, there is also a nationalistic argument here. The US has pointed to dependence on China for semiconductor supply as a cause for worry. According to the summary of the CHIPS bill, only 12% of chips are currently manufactured domestically in the US, as compared to the 1990s when domestic production was 37%. The bill also points out that many foreign competitors, including China, are investing heavily to dominate the semiconductor industry.

Joe Biden said that the CHIPS bill would strengthen the country’s national security by making the US less dependent on foreign semiconductor sources. He also mentioned maintaining US leadership in the chip industry. Therefore, it is clear that the bill has been passed to give the US an advantage to top the global semiconductor game. The US president further said the bill would make cars, appliances, and computers cheaper. Moreover, it will lower the costs of everyday goods.

The state-run media organizations of China, like the China Daily and Global Times, have criticized the provision of the CHIPS bill that would punish American companies for dealing with China. They accused it of being the latest representation of Washington’s efforts to exclude China from the global supply chains.

Chinese officials also warned the concerned companies that they would risk losing market revenue or share in China if the CHIPS bill is implemented. China has said it strongly opposes this legislation, arguing that it evokes the anti-China sentiment and that it is reminiscent of the cold war mindset. However, pro-bill Americans are saying that China is simply upset because of the advantage the US will be at.

The United States is good at researching and designing high-end chips, whereas China and some other countries are good at mass production as these countries have added advantages over the US when it comes to labor costs. According to Gao Lingyun, an expert at the Chinese Academy of Social Sciences (CASS), Beijing, a short-term subsidy through the bill, which is aimed at moving all the semiconductor sectors to the US, will only add to the manufacturing cost. This will make the products less competitive on the international market.

Furthermore, if the concerned companies decide to accept subsidies from the US government and give up the chip investment in the Chinese mainland, it will imply a spontaneous abandonment of the massive Chinese market, which not only produces a large amount of chips at a relatively low cost for them but buys many semiconductor products from these companies. If we consider the facts in this sense, what the bill brings to the global chip industry is loss instead of benefits in the long run.

The CHIPS bill is precisely what the US needs to get the country’s economy on track. By making more semiconductors in the US, the bill will increase domestic manufacturing and lower costs for US residents. And it will also strengthen the country’s national security by making it less dependent on foreign sources for semiconductors.

However, when it comes to the global semiconductor industry, things are not looking so good. Experts say that the CHIPS bill shows the US government’s intention to set hurdles for China and other countries to obstruct their semiconductor industry development. However, as ambitious as it looks, it is unreasonable in many aspects and is making people doubt its effectiveness as well as its sustainability.