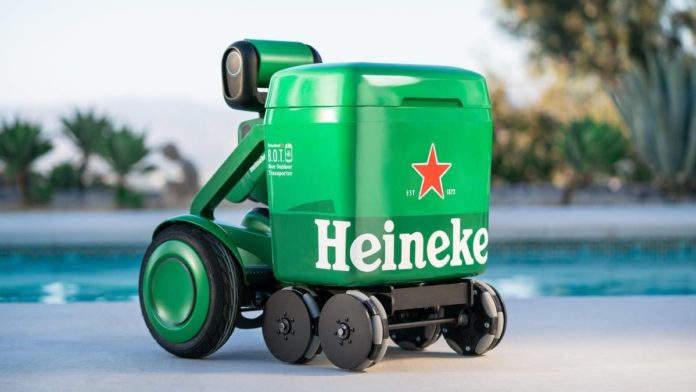 The Dutch beer brewing company launched an online raffle for people who want to buy one. The brand director of Heineken U.S.A., Joshua Egan, said, “Nobody loves lugging around like a giant cooler and sweating in the 100-degree heat.”

The autonomous driving machine was built with the help of artificial intelligence. This summer, it was revealed to mark the country’s return to semi-normalcy after gatherings were discouraged due to the coronavirus last year.

The product is not designed exclusively for Heineken’s products. The B.O.T. also comes with a refrigerating unit, allowing the user to store and chill any can-based beverage outdoors.

The robot features a touch screen, cameras, and sensors in the front to help it avoid obstacles. At the rear end, there is a cooler backpack branded with Heineken’s logo. The company did not reveal the number of robots they are producing, but they said that they have been working with many other companies since the past year to build this product.

The winners of the raffle will be announced within the next week, and the product will ship from Los Angeles after that. Heineken did not mention its plan for the second shipment of B.O.T.

The company noted that the robot weights around 32 Kgs when not filled with ice. They also said that the droid can travel up to 24 Kms in one go when fully charged. Beer Outdoor Transporter is currently priced at $3,250, which is quite expensive, but the company said that considering its capabilities and being the first consumer robot in the United States with such functionality, the cost is justified.

The robot features two modes. One allows the machine to follow you, and the other enables the operator to control where it goes through a smartphone application.