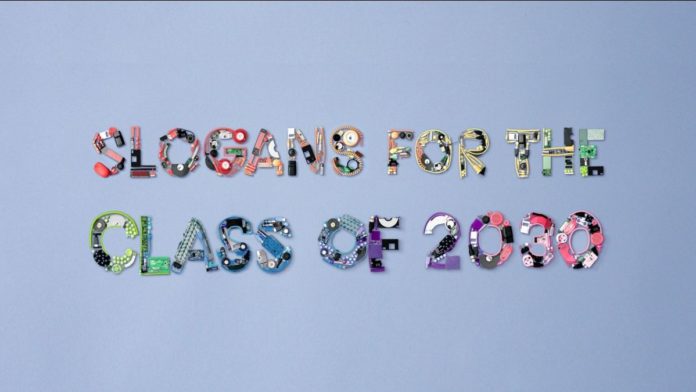 This idea was brought into life by initially training the AI model with Coupland’s 30 years of written work (which is over a million words) for the model to familiarize with the author’s style of writing. Later, the ongoing topics were picked from social media posts and were added to the training sets to build short-form, topical statements. After the model was trained, Couplands text along with the curated topics was the inspiration to create twenty-five Slogans for the Class of 2030.

“I would comb through ‘data dumps’ where characters from one novel were speaking with those in other novels in ways that they might actually do. It felt like I was encountering a parallel universe Doug,” Coupland says. He also added that the statements from the project appeared like gems. Though they weren’t written by him they were still him since they wouldn’t have existed without him.

A usual pattern seen in Coupland’s work is investigating the human condition through the eye of pop culture. This was the focus on the class of 2030. Coupland’s work is aimed towards inspiring students in their early teens who will be graduating in 2030. The motive is to help teens considering their future career paths, Coupland hopes that this project will trigger conversation on the vast possibilities in the various fields and familiarize them with the fact that AI does not have to be strictly scientific, it can be artful.

All the 25 thought-provoking and visually rich digital slogans are available on Google Arts & Culture along with other behind-the-scenes material. Artificial intelligence is evolving in areas that humans could have never imagined like art, emotions and socializing. This is only a small step in the evolution, there are many more routes to go in the forthcoming years.