This behavior by Apple, according to the Commission, has an "exclusionary effect" on competitors and "leads to less innovation and fewer choices for consumers for mobile wallets on iPhones." 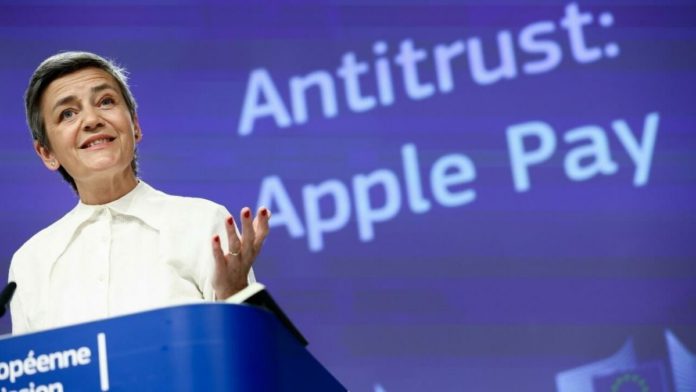 The allegation put on Apple is regarding the company’s act of blocking competitors from its popular “tap-as-you-go” iPhone payment system.

According to early findings, the world’s most valuable company Apple may have infringed competition law by preventing competitors from utilizing its technology. If the charges are sustained, the company may face penalties of up to 10% of its global turnover, which was $36.6 billion last year.

“Apple has unfairly shielded its Apple Pay wallets from the competition. If proven, this behavior would amount to an abuse of a dominant position, which is illegal under our rules,” said Margrethe Vestager, the EU’s antitrust chief.

Vestager further added that the preliminary conclusion that they reached relates to mobile payments in shops by excluding others from the game.

According to the Commission, this behavior by Apple has an “exclusionary effect” on competitors and “leads to less innovation and fewer choices for consumers for mobile wallets on iPhones.”

In its defense, an Apple spokesperson said, “Apple Pay is only one of many options available to European consumers for making payments and has ensured equal access to NFC while setting industry-leading standards for privacy and security.”

The spokesperson also mentioned that they would continue to work with the Commission to ensure that European customers have access to their preferred payment method in a safe and secure environment. Apple is also concerned that tweaking its payment system may make transactions less secure.