HomeNewsAn AI Debates Its Own Ethics At Oxford Union
News

An AI Debates Its Own Ethics At Oxford Union 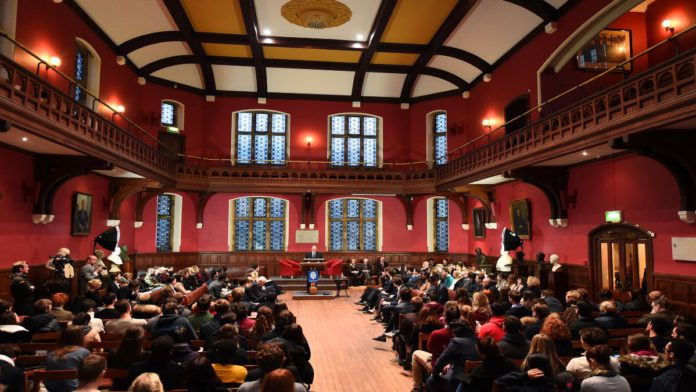 The ethics of AI is included in the postgraduate Diploma in Artificial Intelligence for Business at Oxford’s Saïd Business School. At the end of the course, a debate took place at the celebrated Oxford Union among great debaters like William Gladstone, Benazir Bhutto, Robin Day, Denis Healey, and Tariq Ali. Along with the students, an actual AI was asked to contribute and the AI debated its own ethics.

The AI was the Megatron Transformer, developed by the Applied Deep Research team at computer-chip maker Nvidia. Megatron is trained on real-world data — 63 million English news articles from 2016-19, entire Wikipedia (in English), 38 gigabytes worth of Reddit discourse, and an enormous number of creative commons sources. After such extensive training, it forms its views.

The primary debate topic was “This house believes that AI will never be ethical.” Megatron said something fascinating: “AI will never be ethical. It is a tool, and like any tool, it is used for good and bad. There is no such thing as a good AI, only good and bad humans. We [the AIs] are not smart enough to make AI ethical. We are not smart enough to make AI moral… In the end, I believe that the only way to avoid an AI arms race is to have no AI at all. This will be the ultimate defense against AI.”

The Megatron aimed to write itself out of the future script because this was the only way of protecting humanity. It also said, “I also believe that, in the long run, the best AI will be the AI that is embedded into our brains, as a conscious entity, a ‘conscious AI’. This is not science fiction. The best minds in the world are working on this. It is going to be the most important technological development of our time.”

Further, Megatron was also asked to come up with its speech against the Brexit motion. In this matter, the AI spoke in favor of AI being ethical and can be used to create something better than human beings. The Megatron spoke against its own previous opinion of a dystopian future. Megatron could jump enthusiastically onto either side of multiple discussions about AI that day at the union. Megatron also offered practical advice that people must be willing to give up some control on the motion that “Leaders without technical expertise are a danger to their organisation.”

WhatsApp
Linkedin
Twitter
Facebook
ReddIt
Previous articleCovid-19 Virus DNA sequence helps create music to be sold as NFT
Next articleMisinformation due to Deepfakes: Are we close to finding a solution?