HomeNewsUber Eats and Nuro Team Up for robot food delivery in California...
News 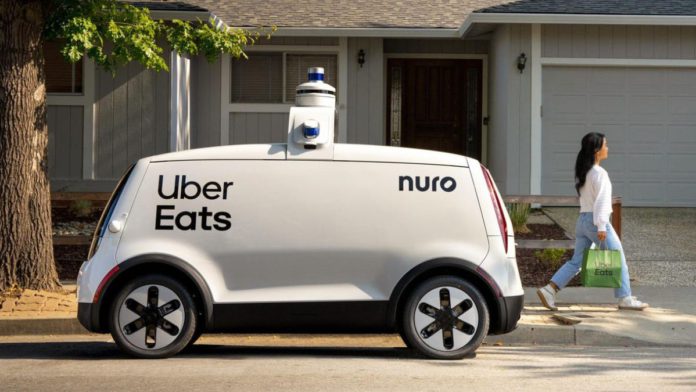 Nuro, an autonomous technology developer, is collaborating with Uber Eats in a long-awaited agreement that will see the company’s newest robot take over food delivery to app customers. Just a few days ago, the two businesses agreed to a 10-year deal, opening the door for a larger rollout of Nuro’s driverless delivery robots, which have been used selectively in a number of cities.

Dave Ferguson and Jiajun Zhu, two former Google workers who worked on the self-driving car project that later became Waymo, founded Nuro in 2016. It was the first company to be granted a special exemption from several federal safety regulations, and it was also the first in California to start charging for its autonomous deliveries.

The DMV of California has granted Nuro a permit that only authorizes it to operate its delivery service in areas of the counties of Santa Clara and San Mateo, which includes much of Silicon Valley but excludes San Francisco and Oakland. That implies that the company will need further DMV approval before extending its service area.

Apart from California, Nuro recently became the first autonomous vehicle business to be awarded a commercial license in Arizona and Texas. This implies that Nuro robots can operate on public roadways for commercial purposes rather than just for research, generating revenue for the firm with each delivery.

The potential of Nuro’s delivery robots to eliminate the need for a human driver, is something that Uber has been working toward as part of its core business for years. However, the slow progress of Level 4 and Level 5 autonomy, which was generally anticipated to come around 2020, had hampered Uber’s plans, since the company has had trouble making money from its regular operations with independent contractual drivers. Early on in the pandemic, Nuro delivery robots saw a surge in interest from corporate partners, but today, rather than being seen as a more sanitary delivery partner, the company’s technology is seen as a cost-saving measure for companies like Uber Eats. Hence, it makes it logical for Uber to partner with Nuro.

The collaboration will commence with autonomous deliveries in Houston, Texas, and Mountain View, California. In the future, service will be extended to the greater Bay Area. Unlike other regions that experience extremely unpleasant weather, these two allow delivery robots to work in favorable conditions. The sensors that allow autonomous vehicles to traverse roads can become confused by rain, snow, and fog. This is also why, Nuro’s California operating license only permits it to do so during fair weather.

It is reasonable to expect that limited deployment in two cities, with intentions to debut in the Bay Area, will not bring much savings to Uber Eats. Even with an endless supply of Nuro delivery robots, regulatory approval will create the main hindrance to achieving the goal of deploying delivery robots in the long run. In addition to local and county permissions, which were challenging enough for Nuro to get in the Bay Area, where Level 4 robotaxis are being tested, commercial driverless licenses are issued state-by-state. It will be necessary for Nuro to concentrate its efforts on areas with acceptable traffic for its robots.

Uber admits that customers won’t know whether a Nuro bot is delivering their order when they place an order. Regardless of the delivery method, they will be charged the same charges. If consumers decide to tip through the app and a Nuro robot arrives in place of a human agent, they will also receive a refund for their tip. But they do have to go outside to collect their own order, and in the rain, that could be quite a nuisance.

According to the company’s video, customers would need to enter a code to access the vehicle door and get their order to demonstrate what a Nuro delivery might look like. Earlier this year, Nuro unveiled its third-generation delivery vehicle, which has an exterior airbag to save pedestrians. Because it has yet to publicly unveil its new vehicle model, it will initially employ its second-generation automobile known as the R2 for the collaboration. The R2 robot, which is around 9 feet long and 3.6 feet broad and travels up to 45 miles per hour, was unveiled by Nuro in February 2020.

The autonomous R2 is powered by renewable energy and is outfitted with 360-degree coverage with thermal cameras, lidar, and radar to traverse roadways on its own successfully. All of this is supported by specialized HD maps and collision-avoidance-based machine learning systems. Furthermore, its modest size appears to help it avoid obstacles and cause less damage in the case of an accident.

Apart from Nuro, Uber Eats has collaborated with other autonomous delivery services, viz., Motional and Serve Robotics, to test robot deliveries. In contrast to Motional, which utilizes electric Hyundai Ioniq 5 SUVs with two safety drivers seated in the front, Serve Robotics manages delivery robots that move across sidewalks. Customers in the Los Angeles region can participate in the respective pilots of Motional and Serve using Uber Eats.

Using robots and autonomous cars for last-mile delivery is something that food delivery services have long considered. For instance, DoorDash became prominent during its delivery services during the coronavirus pandemic. In June, the self-driving robots firm Cartken and Grubhub, owned by Just Eat Takeaway, announced a deal to transport groceries to college campuses.

Overall, this new alliance might be seen as the beginning of a bright new age in the autonomous vehicle industry, delivery, and transportation via EVs.