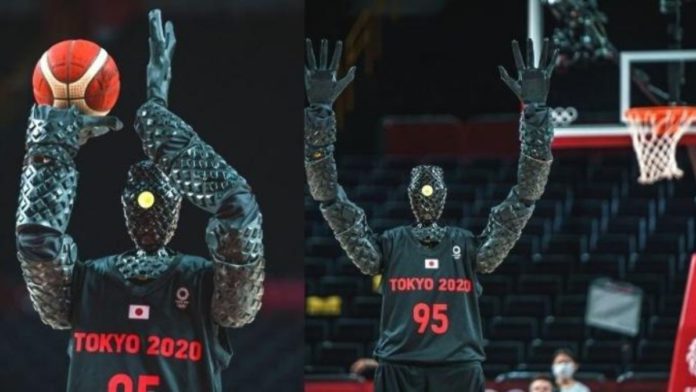 Toyota reveals its artificial intelligence-powered robot during a Group B game between France and the United States at the Saitama Super Arena, Japan.

The humanoid robot was able to shoot difficult three-point shots accurately during the halftime of the official match. Viewers across the globe were astounded to see the capabilities of the basketball-playing robot and took no time to express themselves on Twitter.

Toyota’s third generation of its humanoid robot (CUE 3) is six feet ten inches tall and has sensors around its torso to analyze its distance from the basketball ring and the angle that it needs to achieve for a perfect basket.

It also uses motorized arms and knees for movements. The robot has also bagged a place in the Guinness Book of World Records by performing the highest number of consecutive basketball free throws done by a humanoid robot.

President of Association for Advancing Automation, Jeff Burnstein, said, “If you think about the future where robots work in our daily lives, they’re going to have to be extremely accurate, have great vision, great dexterity and great mobility.”

He further added that this new robot that plays sports is a step towards the bright future of robotics. Toyota officials said that the robot takes 15 seconds to shoot a ball, which according to them, is a bit slow.

Toyota first launched the prototype of CUE back in 2017 that was capable of shooting balls but requires human intervention for movements and positioning.

Toyota has deployed numerous artificial intelligence-powered robots in the Tokyo Olympics to aid humans in many operations like transportation, entertainment, and many more.