Here is a list of top deep learning libraries in Python that will help to get accurate and intuitive predictions in deep learning models. 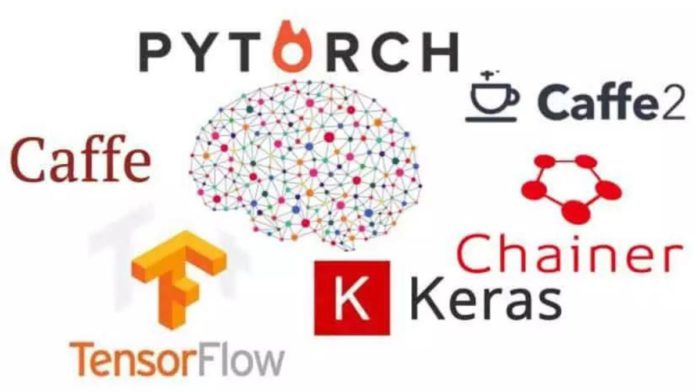 Python is becoming one of the top programming languages providing all kinds of libraries and modules to perform various tasks, including complex numerical computations with multi-dimensional data, data visualization and analysis, machine learning, and deep learning. Deep learning is a subdomain of machine learning and artificial intelligence that imitates the process of gaining knowledge as the human brain does. It is an important element of data science, including statistics and predictive modeling. A variety of deep learning libraries have been developed that offer simple tools and commands to upload data and effectively train the models, assisting users in developing and deploying deep learning models. Here is a list of top deep learning libraries in Python that will help to get accurate and intuitive predictions in deep learning models.

TensorFlow is one of the best deep learning libraries for high-performance numerical computation. It is an open-sourced end-to-end platform and library, first released in 2015 by the Google Brain team providing a wide range of flexible tools, libraries, and community resources. TensorFlow specializes in differential programming, meaning the library can automatically compute a function’s derivatives. It can be a great tool for beginners and professionals in building deep learning and machine learning models because of its abstraction capabilities. The main features of TensorFlow is its architecture and framework flexibility, management of deep neural networks, and capability to run on a variety of computational platforms like CPU and GPU using Tensors. Tensors are containers that can store multi-dimensional data arrays and their linear operations. Thereby, TensorFlow works best on the tensor processing unit (TPU). In addition to training and inference of deep neural networks, TensorFlow can also be used for reinforcement learning and model visualization.

Keras is a notable deep learning library that provides an interface for deep learning and allows rapid deep neural network testing. It supports high-level neural network API, written in Python, and can run on top of TensorFlow, Theano, and CNTK. The library was developed by Francois Chollet that provides tools to build models, visualize graphs, and analyze datasets. Keras is preferred over other deep learning libraries because it is modular, extensible, and flexible. In addition, Keras can work with the widest range of data types, including arrays, text, and images. The library is user-friendly, integrates objectives, layers, optimizers, and activation functions. Another specialty of Keras is it adopts principles of progressive disclosure of complexity, reducing complexity by introducing information and function at increment levels. Keras is powerful enough to provide industry-strength performance and used by organizations like NASA, Microsoft Research, Netflix, and YouTube. The library has use cases for building sequence-based and graph-based networks, fast and efficient prototyping, data modeling, and visualization.

PyTorch is an open-source optimized tensor library for deep learning based on the Torch library, a deep library framework written in Lua programming language. It was created in 2016 by Meta’s AI research team and is now part of the Linux Foundation Umbrella. The library provides two high-level features, which are Tensor computing with strong acceleration via GPU and deep neural networks built on a tape-based automatic differentiation system. Also, with the help of the Torch distributed backend, PyTorch enables scalable distributed training and performance optimization in research and production. PyTorch is written in Python, CUDA, and C/C++ and has the support of libraries or packages used in these programming languages for processing. It provides high flexibility because of its hybrid front-end and allows users to write neural network layers quickly with its deep integration with Python. PyTorch is primarily used in computer vision applications and natural language processing and is one of the most popular deep learning libraries in the industry that companies like Facebook, Twitter, Tesla, Uber, and Google use to build deep learning software. A few deep learning software built on top of PyTorch are Tesla autopilot, Uber’s Pyro, Hugging face’s transformer, PyTorch lighting, and catalyst.

Microsoft CNTK, or the Microsoft cognitive toolkit, is a unified open-source deep learning toolkit for commercial-grade distributed deep learning. Microsoft CNTK describes neural networks as a series of computational steps via a directed graph. Microsoft Research developed CNTK in 2016, having highly optimized built-in components capable of handling multi-dimensional dense or sparse data from Python, C++, or BrainScript (its own model description language). CNTK supports interfaces in Python and C++ and can be used for handwriting, speech, and facial recognition. This popular deep learning library is known for its speed and efficiency due to CNTK’s capability to scale models in production using GPUs. Also, CNTK applies stochastic gradient descent and error backpropagation with automatic differentiation and parallelization across multiple GPUs and servers. It enables users to combine different deep learning models, such as feed-forward deep neural networks, convolutional neural networks, and recurrent neural networks. CNTK is one of the first deep learning libraries to support the open neural network exchange  (ONNX), an open format built to represent machine learning models. ONNX gives the power to move machine learning or deep learning models between CNTK, Caffe2, MXNet, and PyTorch frameworks.

MXNet is one of the most flexible and efficient deep learning libraries in Python developed by Apache Software Foundation and Carlos Guestin, professor of computer science at Stanford University. It is an open-source deep learning software framework designed to train and deploy deep neural networks. The interesting thing about MXNet is that it supports flexible programming models with many languages for binding, including C++, Python, R, JavaScript, Scala, and more. It is a highly scalable library compared to other deep learning libraries providing fast model training and distributed computing, allowing it to train networks across multiple CPU/GPU machines. Also, distribution training works in cloud platforms like AWS, Azure, and YARN clusters. MXNet has a dynamic dependency scheduler that automatically parallelizes symbolic and imperative operations programming to maximize efficiency and productivity.

Caffe (convolutional architecture for fast feature embedding) is an open-source deep learning framework built for expression, speed, and modularity. Initially, the idea of Caffe was created by Yangqing Jia during his Ph.D. at UC Berkeley and further developed by Berkeley AI Research (BAIR) and other community contributors, and is currently hosted on GitHub. The library is written in C++ with a Python interface. It supports different deep learning models, including convolutional neural networks (CNN), region-based CNN aka RCNN, long short-term memory (LSTM) networks, and fully connected neural networks. Caffe supports GPU and CPU-based acceleration computational kernel libraries like NVIDIA, cuDNN, and IntelMLK that allow faster and high-performance computing, for which the library can process over 60M images per day only with a single NVIDIA K40 GPU. It is one of the most popular Python libraries for deep learning, with its exceptional architecture encouraging applications and innovations, extensible code scripts, and the backend community on GitHub. Caffe is mainly used for implementing image detection and classification, academic research projects, startup prototypes, and large-scale industrial applications in computer vision, speech, and multimedia. Although Facebook announced Caffe2, which is based on Caffe in 2017, enabling simple and flexible construction of deep learning models in addition to recurrent neural networks (RNN), Caffe is still in use mainly for academic purposes.

Theano is one of the popular numerical computation Python libraries for deep learning. It was developed by Montreal Institute for Learning Algorithms (MILA) at the University of Montreal in 2007, and its name “Theano” is associated with the incident philosopher Theano, the first known women mathematician who worked in the development of the golden mean. Theano is an open-source project, and its computations are expressed using NumPy-esque syntax and compiled to run either on CPU or GPU-based architectures. The library is written in Python and centers around NVIDIA CUDA, which allows users to integrate it with GPS and provides for defining, optimizing, and evaluating mathematical operations involving multi-dimensional arrays and matrix calculations. Theano has various features, including tight integration with NumPy, the transparent use of a GPU, effective symbolic differentiation, speed and stable optimization, dynamic C code generation, and extensive unit testing and self-verification. It is used extensively for deep learning projects and research due to its high-performance data-intensive calculations.

Deeplearning4j (DL4J), short for Eclipse Deeplearning4j is an open-source distributed deep learning library that consists of a set of tools for running and building deep learning models on Java virtual machine (JVM). It was developed by Konduit.AI and a combined effort of a machine learning group including Adam Gibson, Alex D. Black, Vyacheslav Kokorin, and Josh Patterson. In 2017, Skymind, a San Franciso-based business intelligence and enterprise software firm, joined the Eclipse Foundation and updated DL4J to integrate it with Hadoop and Apache Spark. Among other deep learning libraries in Python, only DL4J allows training models in Java while interoperating with the Python ecosystem via a mix of Python executions of CPython bindings, model import support, and interoperability of other runtimes like TensorFlow-java and onnxruntime. It is written in Java, C++, C, CUDA and supports many neural networks, including CNN, RNN, and LSTM. The use cases of DL4J are many, from importing to retraining models of PyTorch, TensorFlow, and Keras and deploying these models in JVM microservice environments, mobile devices, IoT, and Apache Spark. Also, DL4J provides toolkits for vector space and topic modeling designed to handle large text sets and use them in natural language processing.

There are other deep learning libraries, including Lasagne, Chainer, Glucon, and more which did not made it to this list but perform efficiently.