This list consists of the top 10 machine learning libraries in Python used vastly among programmers. 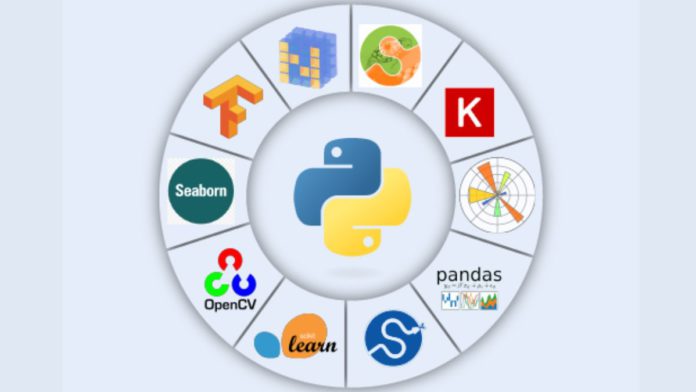 This list consists of the top 10 machine learning libraries in Python used vastly among programmers.

Numpy is an open-source library that enables numerical computing in Python and is one of the most popular Python libraries for machine learning, useful for fundamental scientific computations. It was created in 2005 as an open-source project on GitHub, built on the early work of Numeric and Numarray libraries. NumPy comprises a collection of high-complexity mathematical functions which can process large multi-dimensional arrays and matrices. The library efficiently handles linear algebra, Fourier transformation, and random numbers. The main functions of NumPy are dynamic N-dimensional array objects, broadcasting functions, and special tools to integrate C or C++ and Fortran code. It lets users define arbitrary data types with a multi-dimensional container for any generic data and easily integrate them with most databases.

SciPy is an open-source library based on NumPy. It is popular among Python libraries for machine learning because of its scientific and analytical computing capabilities. As SciPy is based on NumPy for its array manipulation, it also includes all NumPy functions with the addition of proficient scientific tools. SciPy was created as a resultant collective package written by Travis Oliphant, Eric Jones and Pearu Peterson in 2001 when there was an increased interest in creating a complete environment for scientific and technical computing in Python. Today, the development of SciPy is supported and sponsored by an open community of developers. In addition, the SciPy community is an institutional partner with Quansight Labs and is directly funded by Chan Zuckerberg Initiative and Tidelift. The library offers a range of modules for linear algebra, image optimization, integration interpolation, special functions, signal and image processing, ordinary differential equations solving, and more in science and analytical computing.

Scikit-learn or Sklearn is one of the basic Python libraries for machine learning used for classical machine learning algorithms. It is built on top of NumPy and SciPy for effective use in the development of machine learning. Scikit-learn was developed under the Scikit-learn project started by David Counapeau as a Google summer of code project in 2005. Then, in 2010 the first version on Sklearn was released by Fabian Pedregosa, Gael Varoquaux, Alexandre Gramfort, and Vincent Michel of INRIA (The national Institute of Research in digital science and technology). The library has a wide range of functions supporting supervised and unsupervised learning algorithms. The main functionalities of Scikit-learn are classification, regression, clustering, model selection, preprocessing, and dimensionality reduction. In addition, Scikit-learn is used for data mining, modeling, and analysis.

TensorFlow is an open-sourced end-to-end platform and library used for high-performance numerical computation. It was first released in 2015 by the Google Brain team, and it specializes in differential programming, meaning the library can automatically compute a function’s derivatives. The library is a collection of tools and resources required to build deep learning and machine learning models. TensorFlow can be a great tool in deep learning for beginners because of its architectural and framework flexibility. The specialty of TensorFlow is its easy distribution of work onto multiple CPU or GPU cores by using Tensors. Tensors are containers that can store multi-dimensional data arrays as well as their linear operations. Although the primary function of TensorFlow is in the training and inference of deep neural networks, it can also be used for reinforcement learning and model visualization with its built-in tools.

Keras is an open-source software library in Python that provides an interface for deep learning. It can run on top of TensorFlow, Theano, and CNTK and was developed focusing on fast experimentation with deep neural networks. Among other machine learning libraries, Keras can work with the widest range of data types, including arrays, text, and images. Keras is simple to use, reduces the cognitive load on developers, and is flexible in adopting principles of progressive disclosure of complexity, meaning reducing complexity by introducing information and function at increment levels. Also, Keras is powerful, providing industry-strength performance, and has been used by organizations like NASA and YouTube. These three key features of simplicity, flexibility and power of Keras make it one of the best machine learning libraries in Python. Keras offers fully functional models for creating neural networks integrating objectives, layers, optimizers, and activation functions. The library has many use cases, including fast and efficient prototyping, research work, and data modeling and visualization.

Pandas is a software library used for data science and analysis tasks in Python. It is built on top of the NumPy library, which provides numerical computing and specifies data extraction. Before building and training machine learning models, there is a need to prepare a dataset to clean and preprocess the data. Pandas help prepare the data with various tools for analyzing data in detail and is designed to work on relational and labeled data. The development of Pandas began in 2008 at AQR capital management by Wes McKinney, by the end of 2009, Pandas became open-sourced, and in 2015 Pandas became a NumFOCUS sponsored project. Now, Pandas is actively supported by a community of innovative developers and researchers worldwide, contributing to using the open-source Pandas library. It is one of the best Python libraries with high stability because of its backend code written in C or Python. Pandas provide high-level data structures, including two main types, one-dimensional series and two-dimensional DataFrame. Moreover, Pandas offers a variety of tools to manipulate series and DataFrames, so that users can prepare the dataset based on their needs.

Matplotlib is a data visualization or plotting library used in Python and is built upon SciPy and NumPy used for graphical representation. It is compatible with plotting data from SciPy, NumPy, and Pandas and provides a MATLAB-like interface that is exceptionally user-friendly. In 2002, John Hunter developed Matplotlib, which was originally a patch to IPython enabling interactive MATLAB-style plotting. Matplotlib provides an object-oriented API using standard GUI toolkits like GTL+, wxPython, Tkinter, or Qt and helps developers to build graphs and plots. The library can generate different types of graphs, including histograms, bar graphs, scatter plots, image plots, and more. Although Matplotlib plotting is limited to 2D graphs, the graphs are high-quality and publish-ready.

Seaborn is an open-source Python data visualization library based on Matplotlib and integrates closet with Pandas data structures. Plotting with Seaborn is dataset-oriented, where declarative APIs are present to identify relationships between different elements and details of how to draw the graph. Seaborn also supports high-level abstractions for multi-plot grids and visualizes univariate and bivariate distributions. With data visualization, Seaborn helps explore and understand data by performing necessary semantic mapping and statistical aggregation internally to produce informative graphs. Seaborn is used in many machine learning and deep learning projects, and its visually attractive plots make it suitable for business and marketing purposes. Moreover, Seaborn can create extensive graphs and plots with simple commands and few lines of code, saving time and effort at the users’ end.

NLTK (natural language toolkit) is one of the most popular Python libraries for machine learning used for natural language processing (NLP). It is a leading platform for building Python applications to work with human language and provides over 50 easy-to-use interface corpora and lexical resources for text processing. NLTK can be defined as a set of libraries combined under one toolkit for using symbolic and statistical NLP for English. Steve Bird and Edward Loper developed NLTK at the University of Pennsylvania with an initial release in 2001 and a stable release in 2021. There are various tasks like classification, tokenization, stemming, tagging, parsing, and semantic reasoning in NLP, which different text processing libraries in NLTK can perform. As NLTK processes textual data, it is suitable for linguistics, engineers, students, researchers, and industry analysts. Further, the library is used in sentiment analysis, recommendation and review models, text-classifier, text mining, and other human language-related operations in the industry.

OpenCV (open source computer vision) is an open-source computer vision and machine learning software library. It is a library dedicated to computer vision and image processing used by major camera companies to make their technology smart and user-friendly. OpenCV was built to provide a common infrastructure for computer vision applications. This library consists of more than 2500 optimized algorithms capable of processing various visual inputs like image and video data to find patterns or recognize objects, faces, and handwriting. Among other Python libraries for machine learning, OpenCV is the only library that focuses on real-time data processing for which OpenCV is used extensively in companies, research groups, and Government agencies.

There are other useful libraries for machine learning in Python, including PyTorch, PyCaret, Theano, Caffe, and more which didn’t make it to this list. However, perform efficiently and serves certain use cases in machine learning.