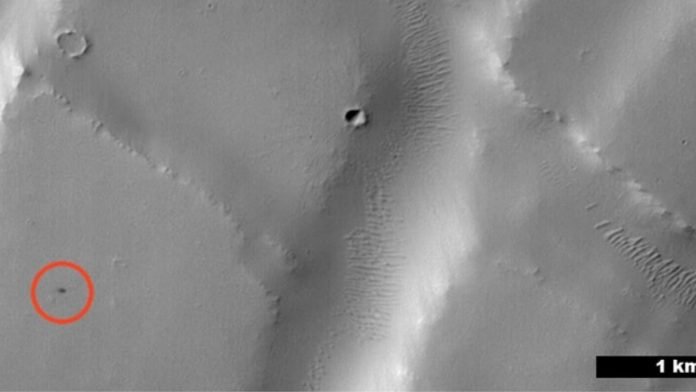 The space scientists at NASA’s Jet Propulsion Lab (JPL) have trained an AI that detects new craters from the image data archives of Mars Reconnaissance Orbiter. And as of now, the team has submitted 20+ craters for additional validation.

NASA had deployed its Mars Reconnaissance Orbiter (MRO) on Mars in 2006. It has been 15 years since then, and the orbiter completed 60,000+ orbits beaming back 404 Terabits of data. The two onboard cameras – HiRise and Context have the lion share of the transferred data in the form of high-resolution images.

A crater is produced by the impact of a meteorite, volcanic activity, or an explosion. They are the subject of interest for cosmologists because these structures provide cosmological cues about the age of the planet Mars and the activities going below its surface. The smallest impact-craters are harder to find because their diameter can be as little as 4 meters and to gauge out one such crater from 316 km above the Martian surface requires substantial technical effort. First, the Context Camera detects them in its low-resolution camera covering hundreds of miles at a time. Next, the high-resolution HiRise Camera is used to validate the finding.

It takes NASA scientists around 40 minutes to manually crawl through one image data to discover new craters. Therefore, JPL researchers trained an AI model that automated fresh impact crater classification to reduce the inference period, from detection to validation. For the model training, the researchers fed 6,830 positive Context Camera images marked with locations of previously discovered impacts confirmed via HiRISE. The training data also had negative examples, images with no fresh impacts. For testing the AI, the researchers used 112,000 Context images. As an immediate result, the whole inference time was reduced from 40mins to an average of five seconds. The NASA AI has detected 20+ craters as of now, and those findings have been submitted for validation via HiRise imaging.