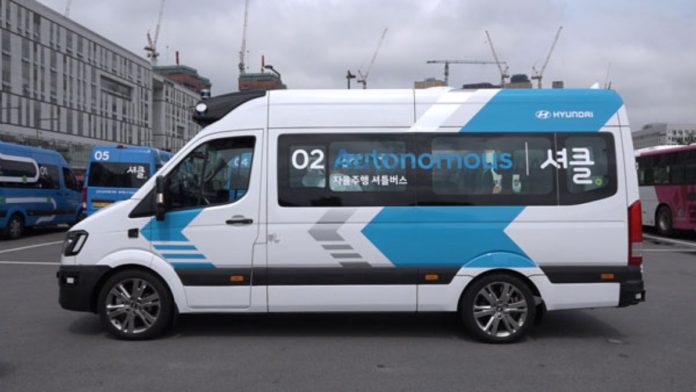 The initial service area is a 6.1km specific route with twenty stops from Government Complex to National Arboretum in Sejong City, South Korea. The vehicle is capable of analyzing its surroundings and making decisions about its movement. According to the company, very minimal human intervention is needed to drive these RoboShuttles.

The Ministry of Land, Infrastructure, and Transport recently issued permission of autonomous driving level 3 to allow Hyundai to temporarily operate the self-driving shuttle from 9th August to 30th September 2021.

The company’s engineers at their Driving Center have renovated its H350 light commercial vehicle and have equipped it with Level-4 comparable core autonomous driving technology. Passengers have to register on the Shucle smartphone application in order to enjoy Hyundai’s RoboShuttle service.

Shucle is a demand-responsive transportation solution to be launched in South Korea. It has been developed by Hyundai’s specialized artificial intelligence research company AIRS to offer mobility services to the public. The taxi will then automatically reach the assigned pick-up location using artificial intelligence algorithms and will stop only at fixed drop points.

The carmaker has already signed a memorandum of understanding with the city’s government authorities on 12th July to eliminate any risk of hindrance while carrying out its operations. Hyundai plans to expand its service to various parts of the country after successfully completing its launch in Sejong Smart City.

The company plans to collaborate with Kia Namyang Research and Development center to further improve its RoboShuttle technology by the end of this year.