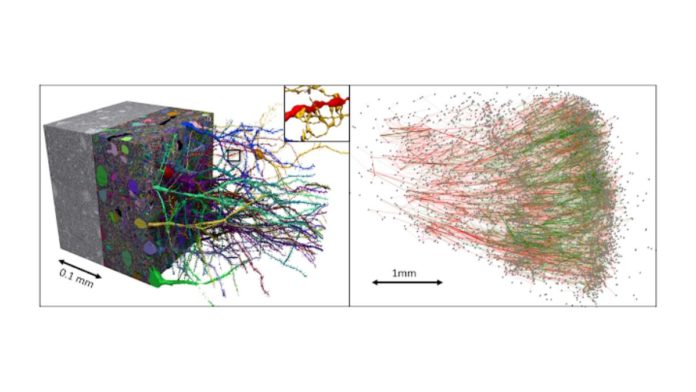 Google and Lichtman laboratory at Harvard University releases the H01 dataset — a 1.4 petabyte of small sample of human brain tissues. According to Google, The H01 sample was imaged at 4nm-resolution by serial section electron microscopy, reconstructed and annotated by automated computational techniques, and analyzed for preliminary insights into the structure of the human cortex.

The dataset consists of one cubic millimeter of imaging data, millions of neuron fragments, tens of thousands of reconstructed images of neurons, 100 proofread cells, and 183 million annotated synapses.

To access the dataset, you can use the Neuromancer browser interface. It allows you to get cross-sectional views of volumetric data, 3-D meshes, and line segment-based models. However, you can also directly download the datasets from Google Cloud Storage’s gsuit tool. Google has also released a Colaboratory notebook to get started with accessing the datasets via TensorStore, a library for reading and writing large multi-dimensional arrays.

Collectively, Google and Lichtman have hosted a live demo, but for specific links, you can open links like FlyEm Hemibrain, which comes with loaded datasets for visuals.

Along with datasets, both firms have released a companion preprint that used H01 to study interesting patterns of the human cortex. Several new discoveries were made with the emergence of new cell types. “While these findings are a promising start, the vastness of the H01 dataset will provide a basis for many years of further study by researchers interested in the human cortex,” Google believes.