The free tool developed by Louis Bouchard can restore low-resolution and damaged portraits to slightly new loved ones. 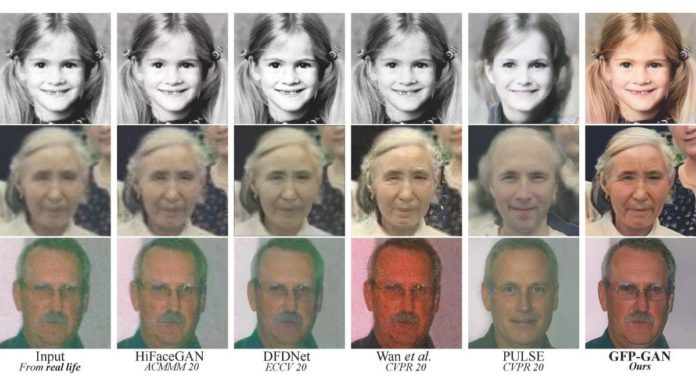 Louis Bouchard, a Chinese scientist, has created a new free tool in collaboration with PetaPixel to restore old and deteriorated pictures with low-resolution and create slightly better ones. The free AI tool GFP-GAN (generative facial prior-generative adversarial network) merges information from 2 AI models to fill in missing details and creates the image while sustaining high quality.

Several AI technologies can create new images from inputs, but not many can fix an old picture. Conventional methods simply fine-tune existing AI models by gauging image differences. GFP-GAN uses a new approach via a pre-trained version of NVIDIA’s StyleGAN-2 model to inform the AI model at several stages of image generation.

GANs are algorithms that use 2 neural networks, the generative model to generate new examples and the adversarial model that classifies them as ‘fake’ or ‘real,’ comparing one against the other.

The restored images produced by the AI do not accurately replicate the original image. Instead, all the components that are added to replace evident traces of deterioration and brighten the original image are model predictions that introduce extra pixels.

The creators have provided a free demo for people to use the tool, along with their code to let developers implement the restoration techniques for their projects. However, the project is constrained by AI’s limitations as it guesses the missing content. The researchers believe there might be a “slight change of identity.”

Regardless of the limitations, the AI tool is doing surprisingly well in accuracy and can remove wrinkles, spots, grains, and a few other telltale signs of damage.