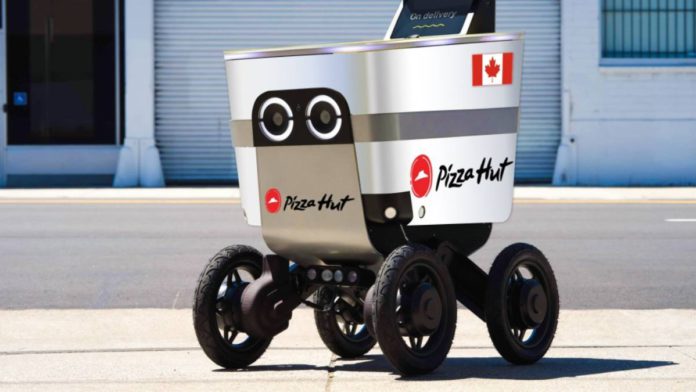 In downtown Vancouver, when customers ordered pizza on Canadian sidewalks, they were greeted by Angie, Hugo, and Raja, four-wheeler food delivery robots with eyelike lights. The robots traveled to the customers who used their unique codes to access their lids and retrieve their orders.

However, the advancement has yet to be welcomed completely. Serving robots have been a debatable value proposition arising from Uber’s 2020 acquisition of Postmates. These robots gained much attention during the labor crunch, climate change, and a slim restaurant margin.

Delivery robots have also been outlawed in certain cities, including Toronto, because they pose a risk to the elderly, children, and those with poor vision or movement. Robots are not welcome in bike lanes, where cyclists already complain about e-scooters. There are also concerns that autonomous robots or ones operated by personnel from outside would eliminate work for couriers.

Prabhjot Gill, McKinsey & Co associate, said, “They’re drawing a lot of attention from pedestrians while they’re out on the sidewalk because they’re not seeing them that often and people are excited to see them, but as usage continues to increase, this can cause a lot of congestion on already narrow sidewalks.”

The chief executive of Serve, Ali Kashani, who was born and raised in Vancouver, views the criticism as an inevitable aspect of innovation. He has made sure that his robots chime and flash their lights to warn people to allay their fears. Besides, they also have emergency braking, automatic crash prevention, and vehicle collision avoidance.