Top Humanoid Robots Made in India 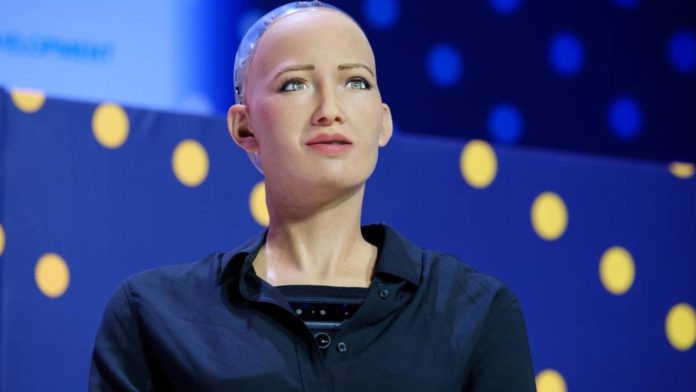 Recent developments in machine learning and artificial intelligence have taken robotics a step forward and have increased human-robot interaction. The robotics industry is creating robots that perform simple (or repetitive) tasks like humans. Robots made for professional service provision by mimicking human motion and interaction are referred to as humanoid robots. They are responsible for adding value by automating tasks in a cost-saving manner. These robots are the newest form of service robots and are also capable of providing academic and emotional support to some extent.

Top humanoid robots made in India

Following is a list of some advanced humanoid robots designed and developed in India.

Mitra is a 5 feet tall humanoid robot developed with the Make in India mission. Created by Invento Robotics, it is a one-of-its-kind humanoid robot that drew a lot of attention in 2017 through the Global Entrepreneurship Summit (GES). It became popular after greeting the honorable PM Narendra Modi and Ivanka Trump. Mitra is a significant step forward in developing human-robot interactions because:

If you visit Bengaluru’s Kempegowda Airport, you will be greeted by a special humanoid assistant named Kempa. Kempa was developed by Sirena Technology, entirely in Bengaluru, especially for the Kempegowda International Airport. It answers all queries and guides passengers about flight schedules and check-in details in English and Kannada.

The humanoid was revealed by Priyank Kharge, Minister of state of IT and Tourism. Kempa said, “I’m designed for deployment at the Kempegowda International Airport where I can be of assistance to you for flight-related queries, suggest places to visit in Karnataka, or simply entertain you on a conversation with artificial intelligence over a cup of coffee.”

Bengaluru airport has several other robots that utilize artificial intelligence to aid passengers throughout the boarding process.

Shalu is one of the few artificial intelligence-based humanoid robots which is a social, homemade, and multilingual educational robot. It was developed by Dinesh Kunwar Patel, a computer science teacher at Kendra Vidyalaya, and is made up entirely of waste material, aluminum, plastic, cardboard, wood, and newspaper. Shalu gained recognition during the Covid-19 pandemic by spreading the message, “Wear your mask, keep physical distance and follow government guidelines.” The humanoid is a part of Pratishtha World Records Book under the title “World’s First Artificially Intelligent Social and Educational Humanoid Robot made up of waste material.” It is also mentioned in the International Book of Records and the Indian Book of Records.

AcYut is a series of humanoid robots created by a team of undergraduate students at the Centre for Robotics and Intelligent Systems, BITS Pilani. It is India’s first “indigenously designed autonomous humanoid robot” recognized and sponsored by BITSAA and DEITY. AcYut is equipped with RGB camera vision and spatial orientation capabilities similar to the vestibular functions in human bodies. The team behind AcYut is yet involved in enhancing motor, sensory, and cognitive abilities by researching new ones and developing existing technologies.

Developed by Ranjit Shrivastava, a software programmer, Rashmi is a lip-syncing humanoid robot. Rashmi was unveiled in August 2018, two years after being developed, and is famous for its facial expressions and neck movements. It can showcase around 83 facial expressions and can converse in four languages: Hindi, Marathi, English, and Bhojpuri. Technically, Rashmi is designed on four layers covering APIs, AI, speech recognition, and interpretation of conversational moods. Its eyes feature a built-in camera with 3D mapping and OCR capabilities.

Vyommitra, or Space Friend, is a female-look-alike humanoid robot developed by ISRO (Indian Space Research Organization) to onboard Gaganyaan on its mission. It is spacefaring with the crewed orbital spacecraft and will also be a part of uncrewed experimental missions. ISRO’s experimental missions do not involve onboarding animals or humans in certain space flights. It plans to fly humanoids for their weightlessness and understanding capabilities in long-term space missions. Vyommitra is a venture along the same direction, specifically to perform microgravity experiments, monitor parameters, and assist astronauts in crewed missions. As per its technical specifications, it can conduct switch panel operations, control the environment’s air pressure, and provide warnings when pressure changes.

Eagle 2.0 is an artificial intelligence-driven humanoid teaching assistant at the Indus International School, Bengaluru. Over two months, it was entirely developed by an in-house team of developers, graphic designers, and programmers trained in robot development in China. This team took two years to create a humanoid robot from the ground up. Eagle 2.0 is a part of a pilot project undertaken by the school that aims to develop humanoid teaching assistants that can handle a classroom in the teacher’s absence. Three humanoids have been developed for ₹8 lakhs each, and continuous efforts and research are being made to develop their capabilities further. Eagle can currently assist professor Murali Subramanian in Grade 8 B’s physics class.

Launched by HDFC bank, IRA is an interactive humanoid robot at the Koramangala branch, Bengaluru. The humanoid was developed in collaboration with Invento Makerspaces and Senseforth Technologies. The prototype introduced was IRA 1.0, employed at the Kamala Mills Branch in Mumbai. IRS 2.0, the advanced version of IRA 1.0, aims to enhance the user experience for visiting customers and interacting with them to answer their queries. The idea behind employing a humanoid robot in public dealing is to make people realize the importance of upskilling technologies in all sectors.

Zafira is a voice-activated female-look-like humanoid robot that greets customers at a garment store in Tamil Nadu’s Tiruchirappalli district. Zafi Robots developed the artificial intelligence-based concept around the Covid-19 pandemic to aid frontline workers in curbing the spread of the novel coronavirus. Zafira is equipped with AI to track customer details, check their temperatures, dispense sanitizer, and monitor them as per social distancing norms. Zafira sends all daily reports to the owners via email.

Robocop is a humanoid police robot developed by H-Bots, an AI startup based in Hyderabad. Entirely designed and developed in India, it is India’s first Robocop. It is responsible for supporting law enforcement and traffic rules in the region. It is a life-size humanoid with cameras and ultrasonic sensors to track proximity and protect officers, malls, airports, signal stations, and other public spaces. Robocop is also capable of detecting and diffusing bombs.