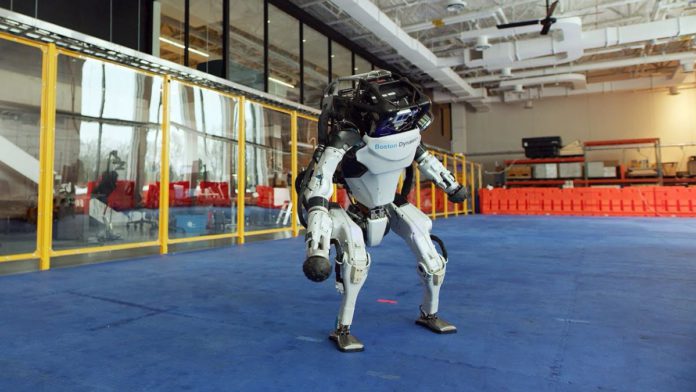 Boston Dynamics’ Atlas robot is now capable of running, jumping, picking up and throwing heavy objects, and performing complex moves that may one day help humanity in factories or construction sites.

In a newly released video called “Atlas Gets a Grip,” the humanoid robot grabs and throws a bag of tools to a worker waiting at the top of a multi-story scaffold.

To some, the new skills may not seem as jaw-dropping since, in the previous videos, the robot dances to the song ‘Do you love me?’ and performs a backflip. However, Boston Dynamics says the technology used in the new control capabilities is more difficult to master than extreme acrobatics.

In the new video, Atlas can be seen picking up not only the tool bag but also a large wooden plank, running up stairs, jumping between levels, and pushing a big wooden box off the platform without losing balance, which according to the company is a “deceptively complex task.”

Boston Dynamics mentioned that for a robot, performing these manipulation tasks needs a more nuanced understanding of its environment, as compared to dancing, where the robot is blind to its surroundings.

Atlas, which is about 1.52 m tall and weighs 86 kg, has a total of 28 hydraulic joints, three onboard computers, and battery-powered electric motors for movement.